Some of the best restaurant suggestions I get are from my eating-partner-in-crime, my boyfriend, artist Jorge Oswaldo. (Yes, I know I’ve already written about his fantastic artwork in a previous post), but for reals yo, the guy truly inspires me! He is not only close to my heart, but close to my stomach as well– he knows what I like to eat!

Plus, seeing as how this weekly series, Foodie Friday is just getting started on the blog, I figure it would be a good idea to begin close to home.

Jorge’s recent artwork ironically, features a few food and beverage inspired influences. I hung out with him at his studio as we chatted about his art and local favorite food spots in the downtown Arts District and beyond. 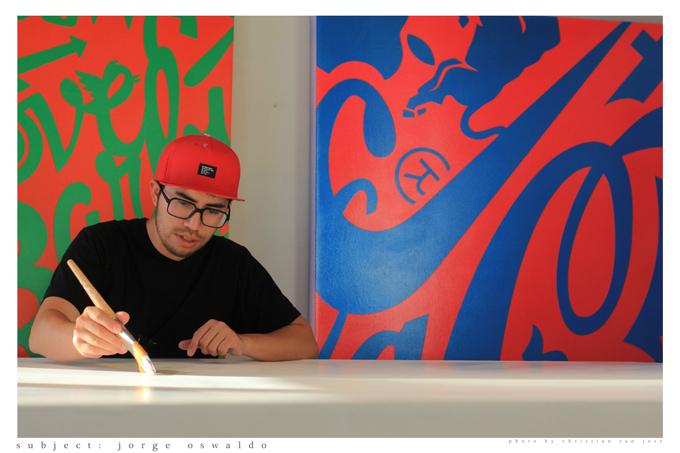 Backyard Bite: Jorge, to start, can you tell us a little bit about your newest works and what they are about?

Jorge: The stuff I’ve been working on lately focuses on identity as its core theme. I first started with a “portrait” painting depicting the brands of products that I like to eat, wear and use [pictured above on right]. From there I started investigating what logos or brands my circle of friends and family were closely related with. People often reveal a big piece of who they are through the brands that they associate with, whether it’s consciously or subconsciously. I wanted to fuse those brands together and create unique juxtapositions that might inspire people to look at these familiar symbols in a different way. Pretty much every American can instantly identify these logos, which are essentially just shapes and lines. 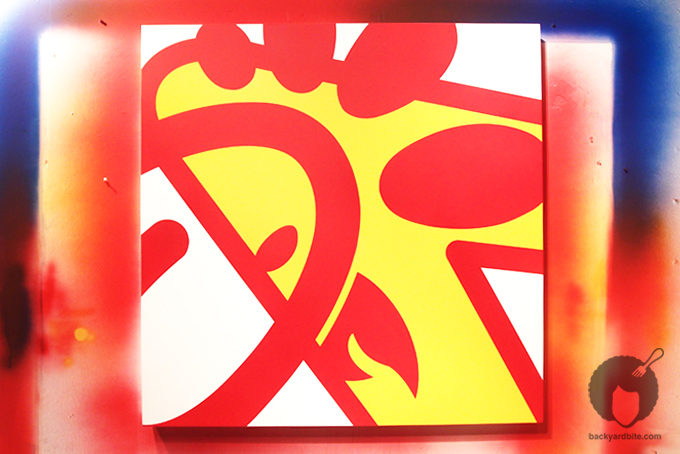 BYB: One of my favorite new pieces you’ve done involves two of my guilty pleasures. Why did you use In-and-Out and Chick-fil-A as the subjects of your painting?

Jorge: This one was inspired by my friend James. I’ve been on this Americana kick lately and these are two very iconic restaurants that people have come to love, especially in LA. I noticed that oftentimes two competing companies, though they try to be different from each other, are essentially really pretty similar in many ways. In this case, two “healthy-ish” fast food chains are combined. I also did one with Coca Cola and Pepsi. 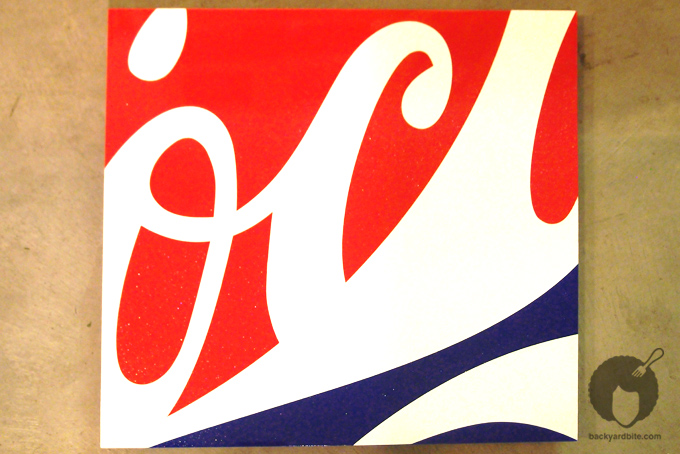 BYB: You spend A LOT of time in your art studio in downtown, Los Angeles. What are some of favorite places to go when you’re there?

Jorge: A lot of my friends had been telling me about this one taco joint in Boyle Heights, Guisados. Once I learned how close it was to my studio, I’ve pretty much been going there once a week. The décor is cool because they have a rotating wall of artists. It’s nothing fancy but it’s cool that they do that. The owners are not scared to write on their walls and get a little creative. 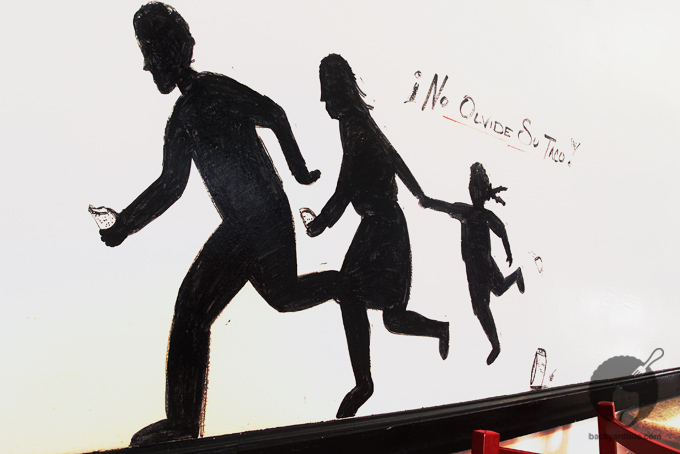 BYB: I agree! Quite possibly the best tacos I’ve had EVER. The place is so beloved by the community that it feels like it has been there forever (even though it’s only two years old). I don’t know anyone who’s tried it and didn’t like it. What do you like to get off the menu?

Jorge: I get the Mole taco and the Chicken Tinga taco. The Sampler Plate is also good if you’ve never eaten there and want to try a variety. 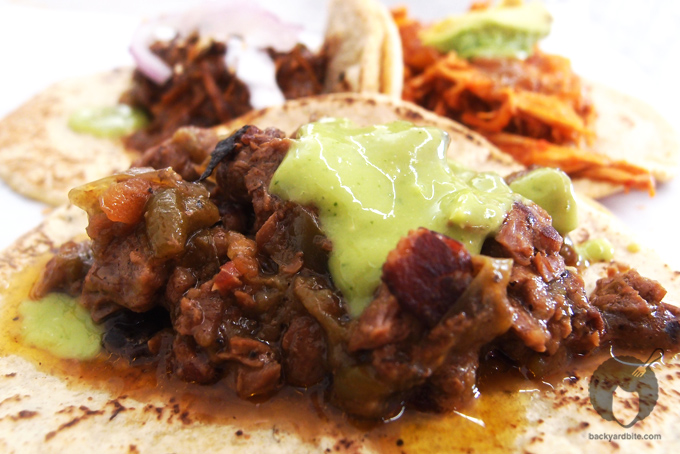 Jorge: Oh man, there are so many. Even though Urth Café is the neighborhood favorite, I try to venture out. I like to get my iced coffee at Handsome.

BYB: Heh! Coffee purists. No sugar or flavorings or anything! I got scolded there once because I asked them if they had soy milk.

Jorge: Yeah, those guys don’t F*ck around. It’s good coffee, you don’t need to add anything.

BYB: Okay, so you’ve finished working on a piece and it’s late at night and you’re starved… Where do you go?

Jorge: I like Baco Mercat – they have both good food and cocktails. The Toron and The Original are my favorite sandwiches. Their Burrata comes with these really good, crunchy pita chips. At least, I think they are pita chips. Whatever they are, they are good.

BYB: Baco is also a great spot for lunch. They serve Stumptown coffee there too, don’t they? I think that’s what you told me once…

Jorge: Yeah, that’s good coffee too. I usually get the house made soda though; Baco Pop. I like the Ginger one.

BYB: Is there anyplace that has really great art on the wall that you like?

Jorge: I like Bottega Louie – ironically for its lack of art. The walls are pristine, white… and from an artist standpoint, I can actually appreciate that. There is so much visual stimulation everywhere you go, but here, you are forced to look at the the architecture, the building, the people or simply what’s on your plate in front of you. There was a lot of thought that went into the design of that place. 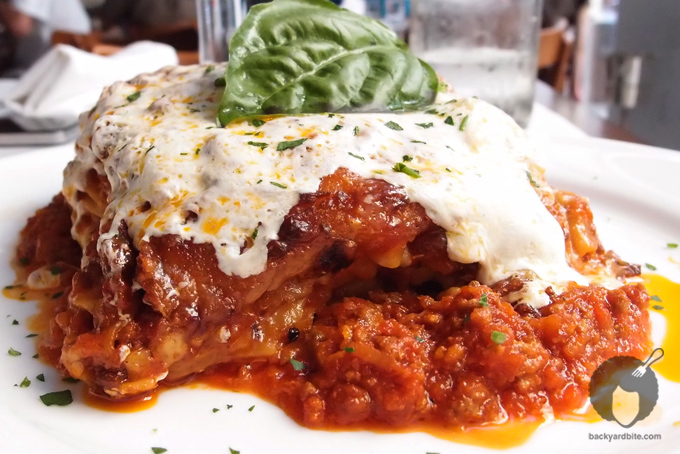 BYB: Haha, Bottega Louie was also mentioned in a previous Foodie Friday post as well! That place sure gets a lot of love.

Thanks for sharing some of your Foodie Friday finds with my readers, Jorge!

Jorge has been selected to be part of the 2012 Baker’s Dozen show at the Torrance Museum of Art. His works will be on view there from July 21st to September 1st.

To check out more of Jorge’s work, visit his website www.jorgeoswaldo.com