These are not your grandma’s tacos. 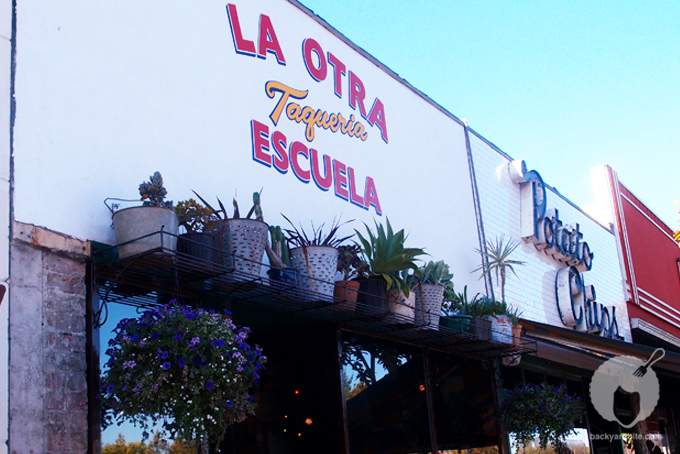 You can call her “the other woman” or “big sister” to her petite predecessor Escuela who resides just yards away. Having opened about a year after the original taco joint, there is now an awkward case of new baby syndrome – everybody is paying attention to the new, cuter addition to the family, while the older kid gets the shaft. Listen carefully, you might actually hear the previous Escuela quietly whimpering on the corner, “don’t forget about meeeee.”

La Otra Taquería Escuela is the larger, sexier, other taco shop. One can wonder if (old) Escuela was simply meant as a tryout… I guess this new restaurant opening means that the neighborhood has passed the test. Tacos win! Tacos win! 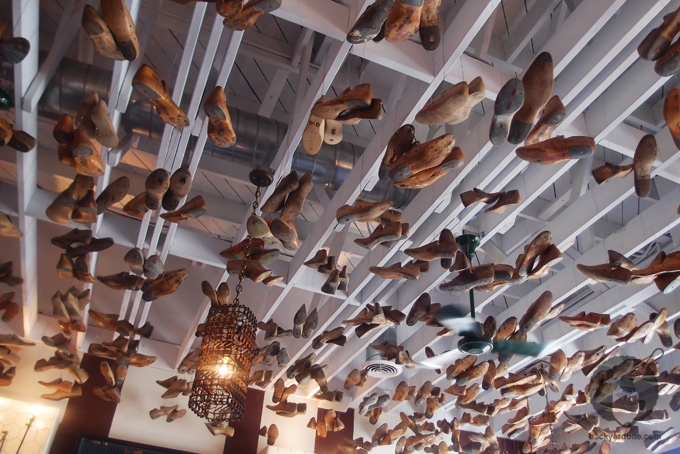 Neighborhood residents were scratching their heads as to why restaurateur Steven Arroyo shuttered his crazy popular tapas restaurant Cobras and Matadors months ago. Last week, with the grand opening of La Otra, we found out why. Now open in Cobras place is a new taco joint – focusing on more standard Mexican fare but with a gourmet twist. They feature the classics; burritos, soups, salads, tostadas, tamales, a hamburger (?) and a whopping 12 gourmet tacos listed on their menu (including shrimp and lobster). There are also a sprinklings of fancier plates like a 1 ½ lb Maine lobster, a skirt steak and a chile stew. 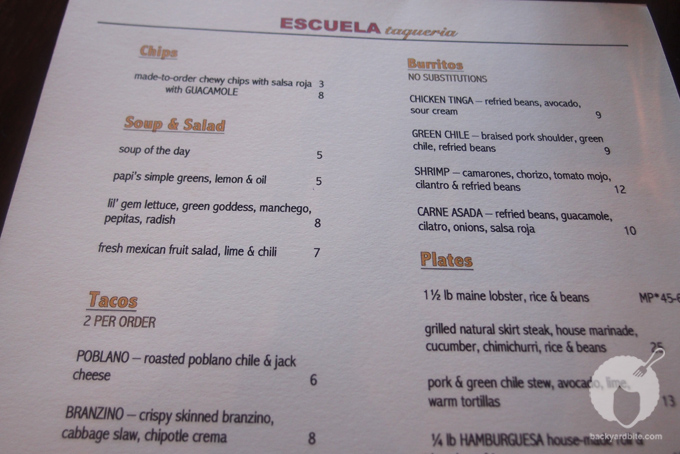 Fans of Cobras are understandably disappointed to see yet ANOTHER taco shop in the place of its beloved tapas restaurant. PORQUE!!?? Though, as a savvy business owner and restaurateur, it makes sense that Arroyo would open up a taco place in our current economical climate. Taco shops are much cheaper to manage and maintain and the menu is basic and more lunchtime and family friendly. Tacos are easy to make, cheap and turn a higher profit – (especially when they are charging $6-$13 for two small tacos).

Here is the pancetta, jack cheese and avocado tacos. I enjoyed the combo, but the pancetta was a bit too salty for my taste. Still, it was good. 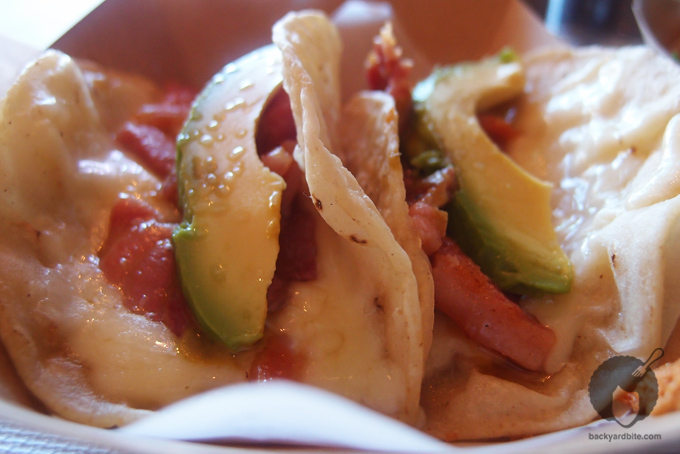 Maine lobster tacos. Definately not something you see at your everyday Mexican joint. 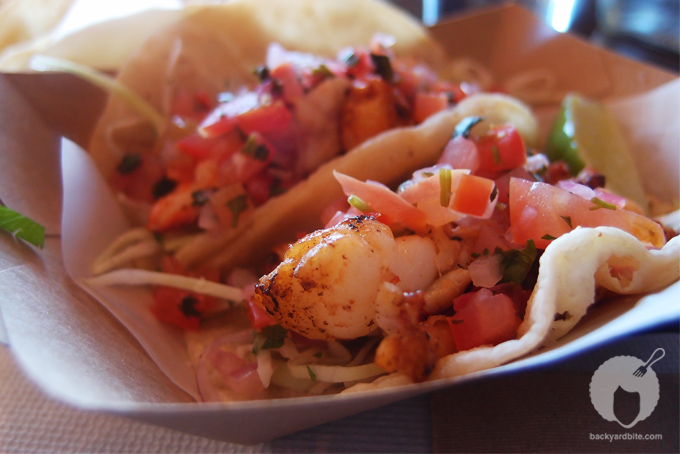 Being that La Otra is BYOB (for now) and open for both lunch and dinner (11 am-11 pm), it should get a decent amount of traffic. La Otra has got the casualness of Arroyo’s neighboring sandwich shop, Potato Chips and a few novelty menu items e.g. the lobster to lure the foodies.

Still the question remains, why have two, virtually identical mexican restaurants, on the same block, competing with one another? I’m not quite sure what is going to become of the smaller, original Escuela around the corner (now just open for dinner 6-11 pm). Hopefully it’ll change to a coffee and dessert joint or perhaps a cute little late night bar that just so happens to serve tacos too (one can only hope). 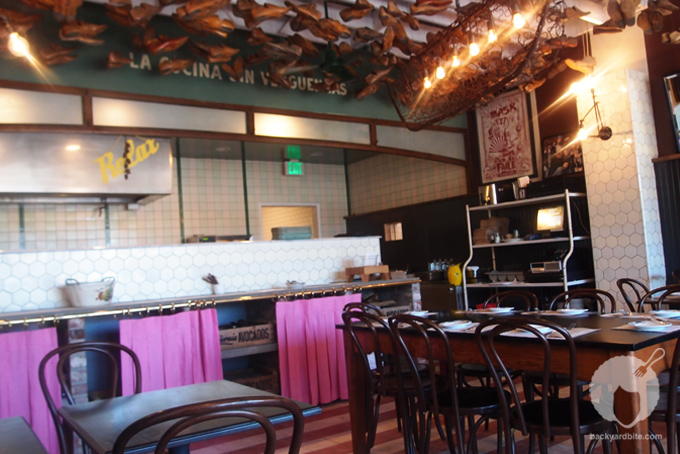 If I knew not of Cobras and the original Escuela around the corner, I probably wouldn’t be so quick to comparisons. I would simply find La Otra to be a cute, yet casual gourmet taco place good enough to enjoy simple neighborhood eats with friends.

That being said, come for lunch. Bring some wine. Enjoy the food. Bring your sugar daddy. 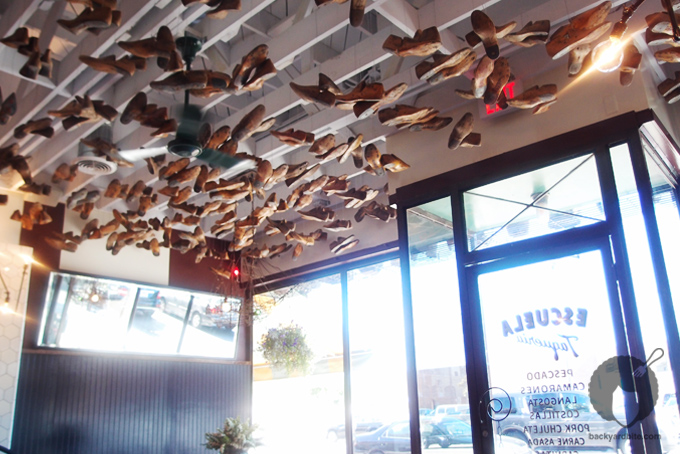