You may have noticed, if you follow Backyard Bite’s facebook or twitter feed, that I have recently been posting a lot of pictures from Maui the past few weeks. Maybe you even asked yourself while scrolling through instagram, why the heck is this LA food blogger, tweeting about Hawaii!? How did she get there!? And why is she so damn lucky!? Well, I am still asking myself the very same questions. I’m still reeling over the experience, the amazing people I met, and delicious food that I couldn’t get enough of over my 6 day foodie excursion.

Allow me to explain how this… 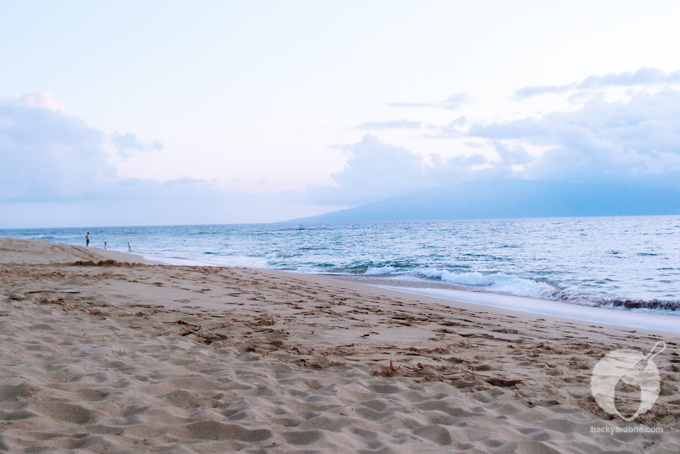 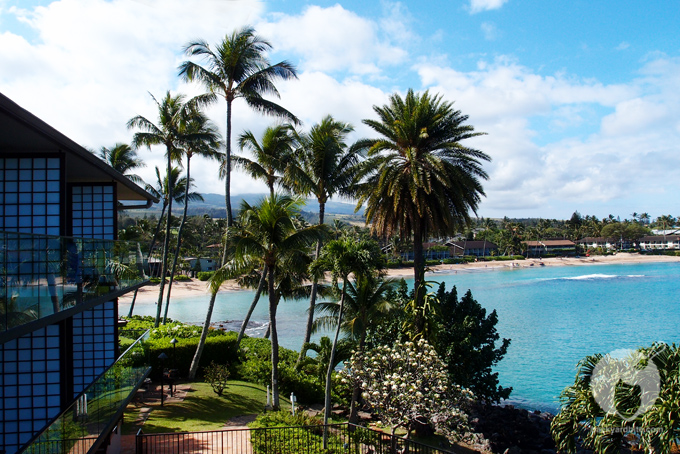 A few weeks ago, I was contacted by the Maui Visitor’s Bureau to see if I was interested in learning about Maui’s agriculture, farm-to-table and sustainability practices. Being that Backyard Bite is a champion of all things local and supporting the businesses in ones’ own “backyard” and community, I jumped at the chance to learn more!

Little did I know, Maui is a great place for food! In addition to meeting various chefs, visiting farms and investigating the island (through my belly), one of my duties while on Maui was to be a judge at the Maui Onion Festival, a tradition in Maui for the past 25 years. 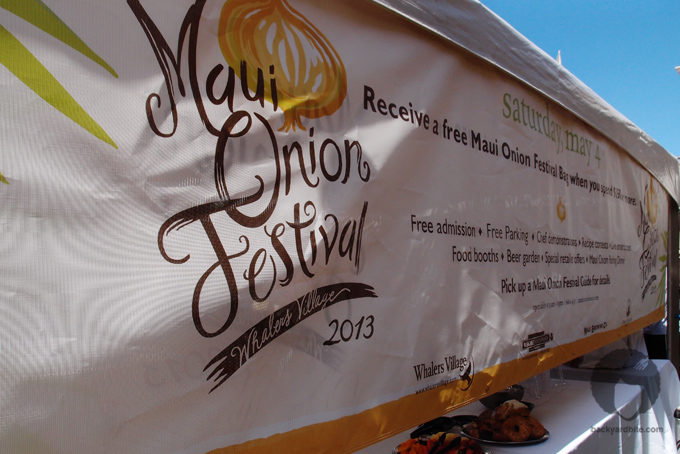 The festival is kind of a big deal on the “Magic Isle” (or “Valley Isle” depending on which island nickname you subscribe to). It is an opportunity for locals and visitors to celebrate Maui’s local agriculture – namely the cherished Maui onion, grown exclusively on farmlands in the Kula district and has certain unique characteristics. They are mild and slightly sweeter than the onions you’d get at your local supermarket (that is if you live in any of the other 49 states). These onions are delicious. No tears necessary. 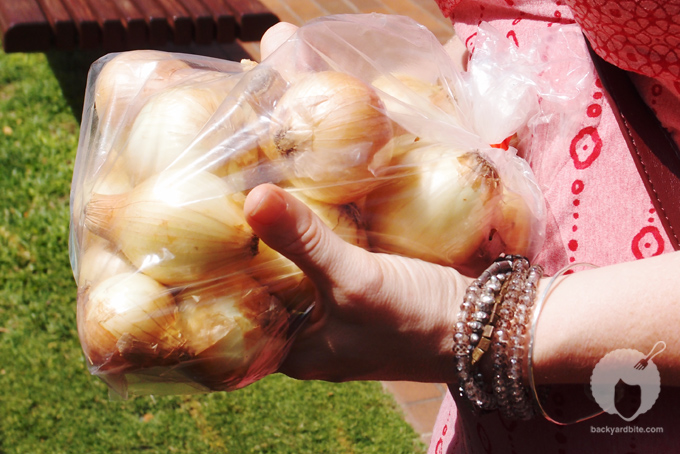 Because they are sweeter they are super versatile when cooking, and on a scale from 1-10, the halitosis factor is around a 3. This was good news for me, as my main task on the day of the festival was to eat various dishes from local chefs which utilized the trademarked kula-onion in multiple ways. Although I brought along a hoarder’s supply of Listerine, Altoids, gum and toothpaste, I actually didn’t need any of it. At least, I don’t think I did… 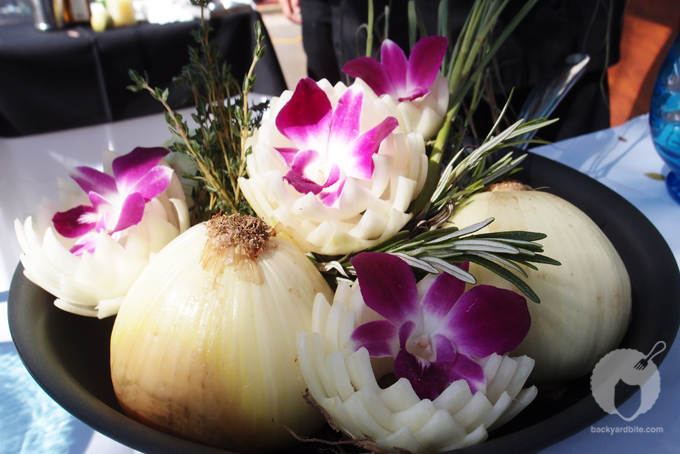 The build up to the main event involved local chefs competing with recipes utilizing the tasty veg. It all culminated on May 4th when the chef finalists from all around Ka’anapali went head-to-head with their recipes and the judges (that’s me!), got to decide the winner. 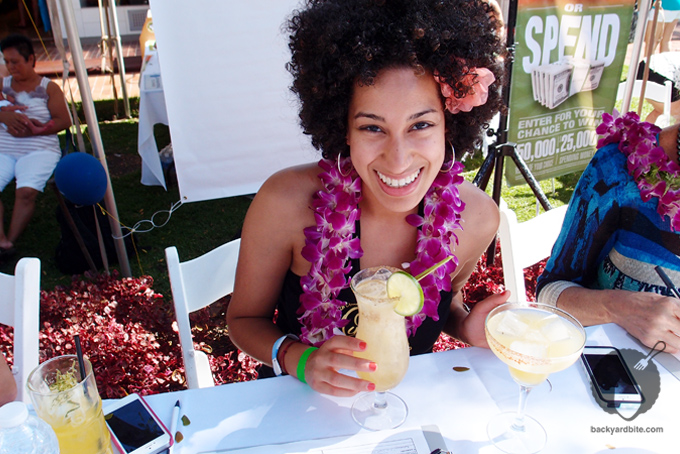 After the morning 10:30 Ka’anapali chef competition (more on this in another post), there was also a cocktails contest featuring local mixologists. Yeah! Now, we’re talkin!

My fellow judges and I went from super excitement over the idea of getting wasted at 2:00 in the afternoon, to sudden worry — we realized that we were going to be drinking cocktails made with, you guessed it, Maui onions. Gulp! 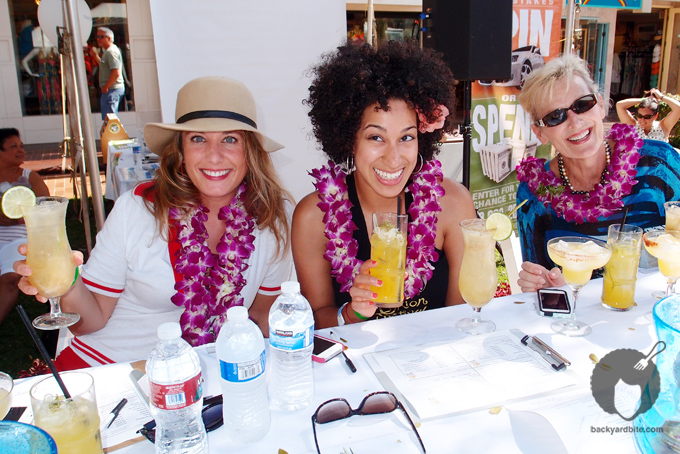 Not only were were in charge of drinking these pungent concoctions, but we had to sit on the main stage in plain view of the eager crowd of onlookers. Oh, boy, we were ON THE STAGE!

Every grimace, gulp, twitch and curious thought that appeared on our faces… they all saw it. I hope I didn’t have onion in my teeth… 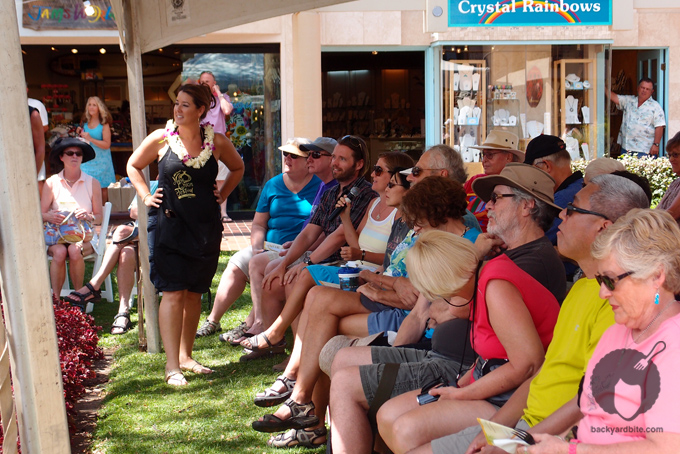 While we watched the mixologists at work, we judges, in turn, were being watched too! I didn’t mind though, it kinda made it all the more exciting. 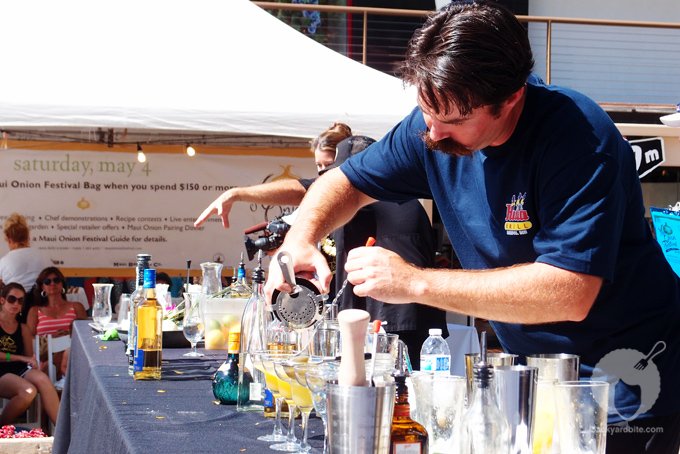 Ok, so the first cocktail was the mildest and thus the most palatable. I told my neighboring judge that I would actually order it in a bar. It was pretty tasty! A refreshing, lightly onion infused margarita with a slightly spicy kick, thanks to the jalepeños.

#1 The Rufus – a mango margarita, jalapenos, orange bitters, lilikoi, and Maui onions (below) 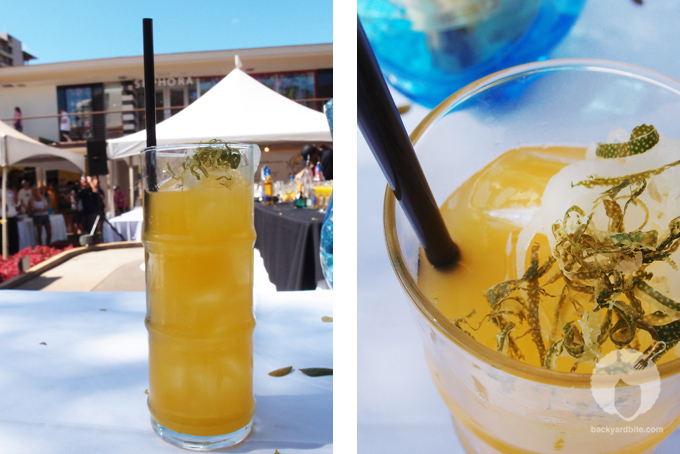 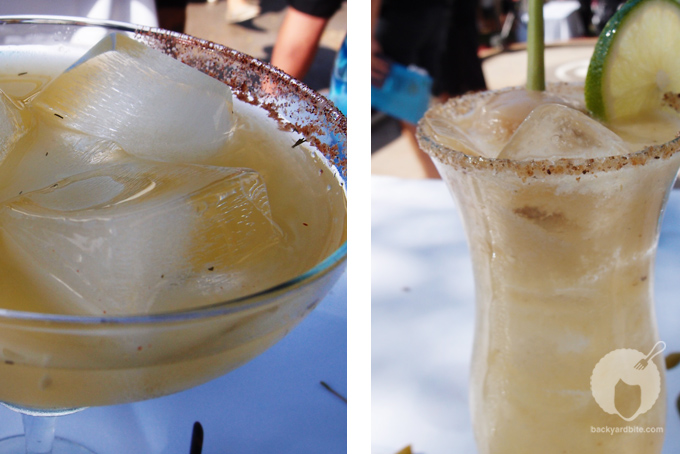 The second drink made by Ross Steidel from Whaler’s Village popular Hula Grill, was a bit wilder. Named, “The Ecuadorian Bus Ride”, which you could imagine just from the name of it how it might taste, it had pickled onions, mango, cilantro and a dash of lime. My internal monologue with this drink went something like, “Mmm, tasty… Hmm there’s like an odd aftertaste that I just can’t put my finger on… what is that?… hmm, it’s kinda like an onio—- It’s ONION! Duh!” Welcome to the Onion Festival, Amy. 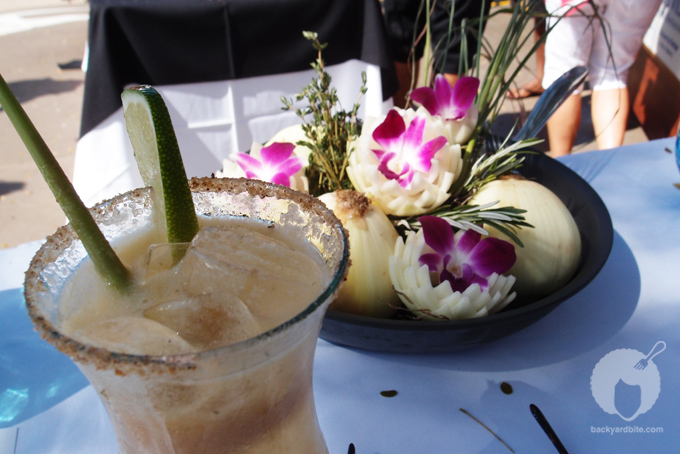 Finally, and the most exotic of the trio of cocktails was concocted by a local mixologist named Skye Dante from Maui Fish and Pasta. This dude went ALL out – thyme, rosemary, lemongrass, and of course a sautéed Maui Onions chilled and emulsified – all combined into a gelatinous ice cube that, enhanced the onion flavor. He carved up Kiawe wood chunks, set stuff on fire, smoked the salt and then presented this crazy margarita for our consumption right there on the festival stage. Let’s just say, if you like onion flavor, you would marry this drink. It was by far the most creative (and pungent) cocktail. 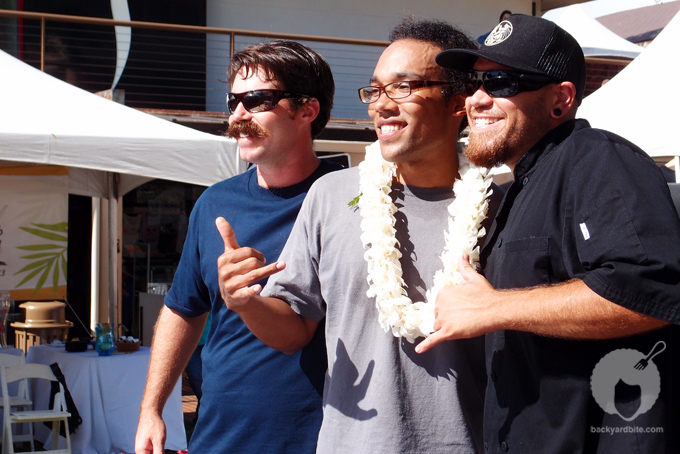 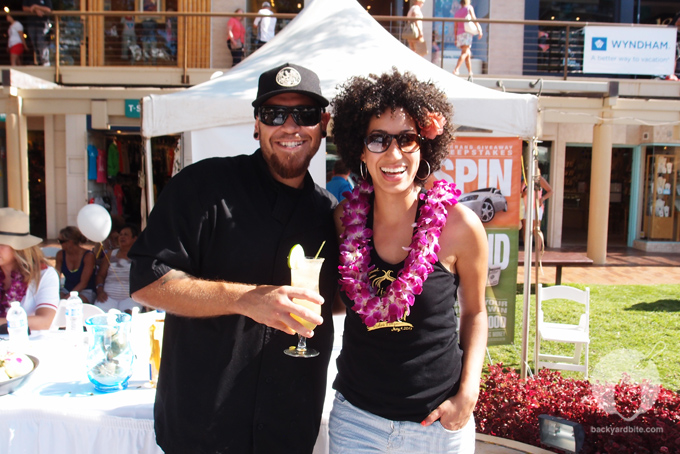 In the end, we named local bartender, Dennis Day (pictured below) from Leilani’s as winner with his relatively safe but super tasty, mango-onion margarita, “The Rufus”. 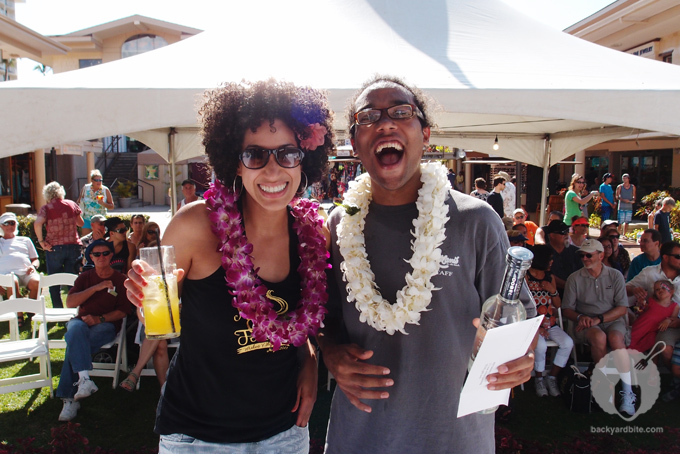 There were tons of other activities held throughout the day including an onion eating competition, demos from celebrity chefs, food samplings from neighborhood restaurants and lots of great music and entertainment. If you are ever on Maui during this festival, I recommend checking it out for sure! 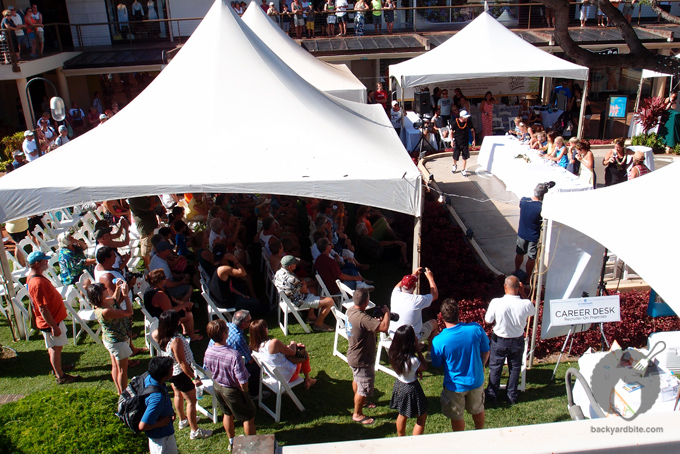 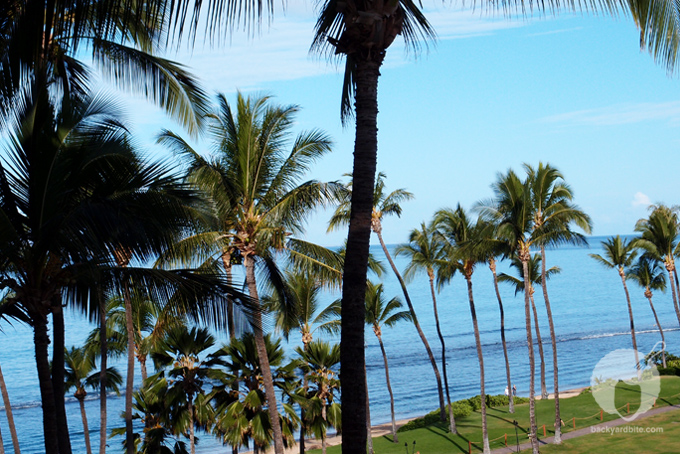 NOTE: I was a guest of the Maui Visitors Bureau and their partners
and thank them for their Hawaiian hospitality.
All comments and opinions expressed are strictly my own.
Mahalo Charlene, Maui Visitors Bureau, Whaler’s Village all the new friends I made on Maui!