Have you ever watched grown ass men and women willingly shove food in their faces non-stop for ten minutes? It’s quite a sight. After seeing my first ever “big time” competitive live event, I must say I have a certain newfound respect for the competitive eaters. Is it a sport? I can’t really say. Are they crazy? Yeah, probably. Is it impressive? Most definately. 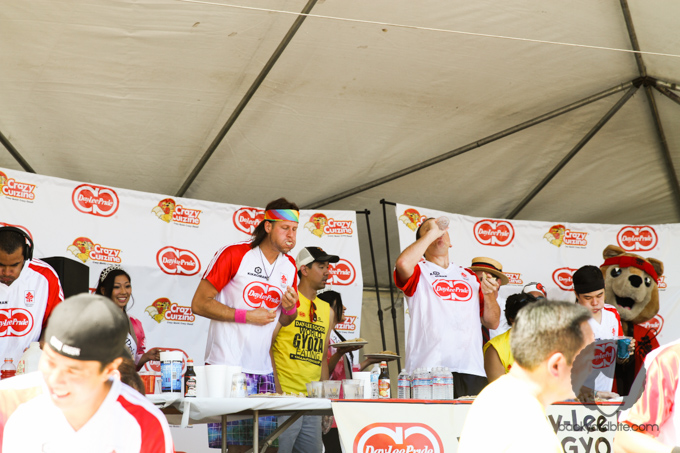 The famous Ramen Yokocho Festival was held in Little Tokyo to celebrate Nisei Week this past weekend. I stopped by for some ramen and lingered the festival grounds when I heard that the Day-Lee Foods World Gyoza Eating Championship was also taking place. I had no idea I was about to get a front row seat to watch some of the best competitive eaters in the world stuff their faces with hundreds of Gyoza dumplings.

I cheered, I laughed, I cried – I felt like puking. 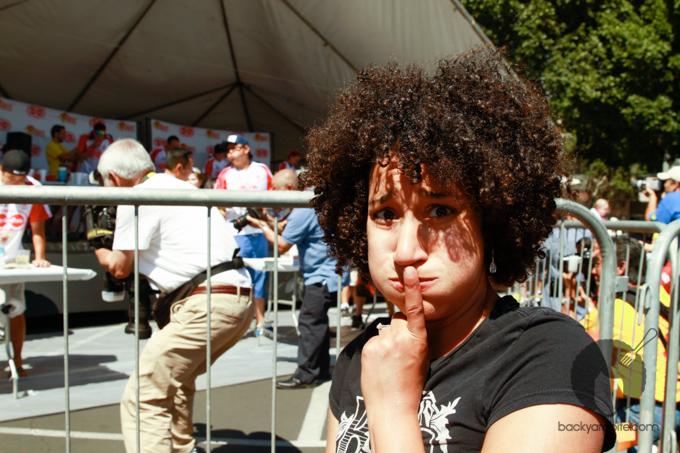 The competition featured the #1 ranked competitive eater, 30-year-old Joey “Jaws” Chestnut (also known as the “LeBron James of competitive eaters“). He holds records for eating the most burgers, hotdogs, Twinkies, hard boiled eggs and shrimp wontons to name just a few. His competitors included Matt “Megatoad” Stonie (who was last year’s Gyoza champ) and the “Princess” Miki Sudo going head to head with about a dozen other ranked and amateur eaters. 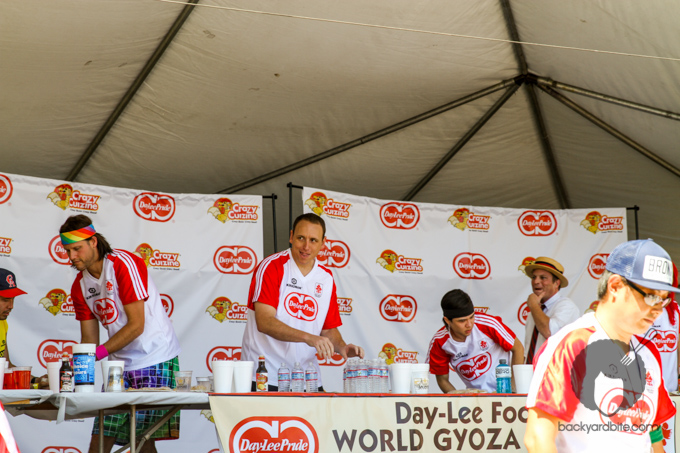 Joey “Jaws” Chestnut (dead center) has a plan for world domination… and it’s in his stomach.

I also unexpectedly ran into my blogger pal, @deependdining, Eddie “Linsatiable” Lin who was thrown into the competition on a lark. I asked him if he had ever done anything like this before and he said, “No way, not at this level!” He ended up eating 37 Goyza which was impressive considering the 90+ degree heat. 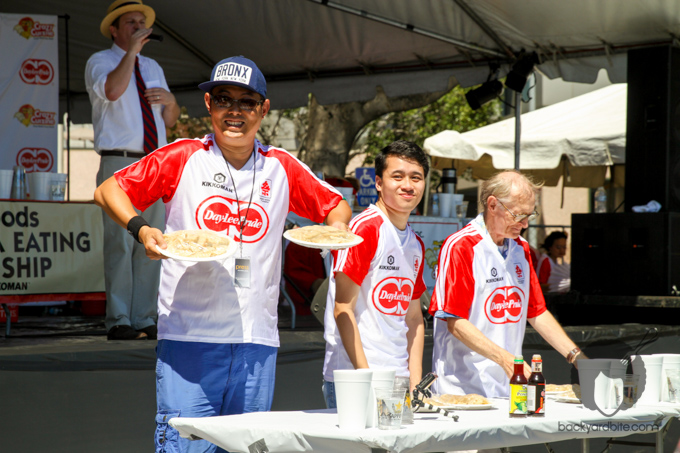 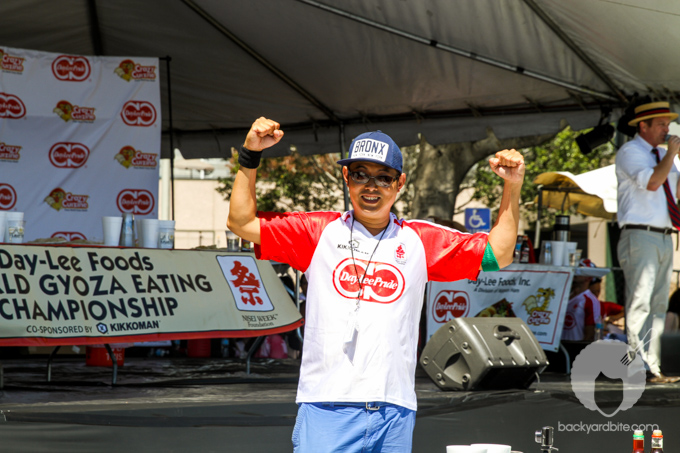 An honorable effort from my pal Eddie Lin.

So, how did this year’s winner, Joey Chestnut do? Here’s the run down. 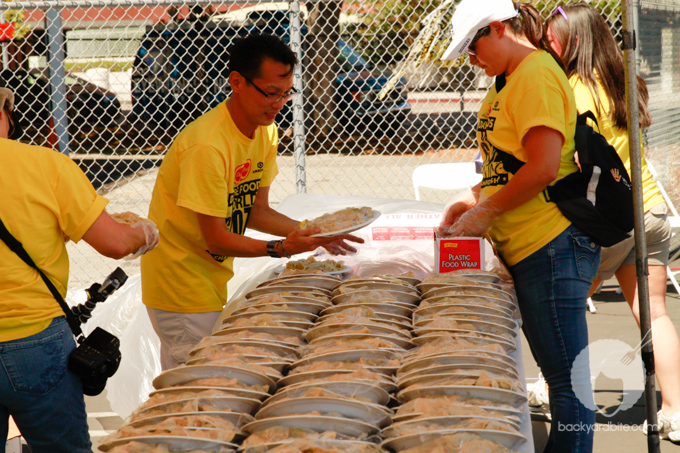 “Here comes the Gyoza!” shouted Barry from the crowd

This years winner, Chestnut took down more than 12 plates — roughly 30 Gyoza on each plate. One plate looked like this… 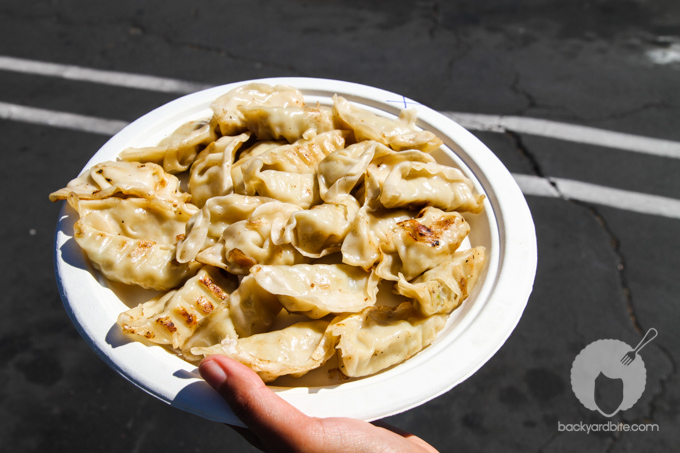 Would you like a side of dumplings for your dumplings, sir?

Just ten minutes to take as much down as you can. 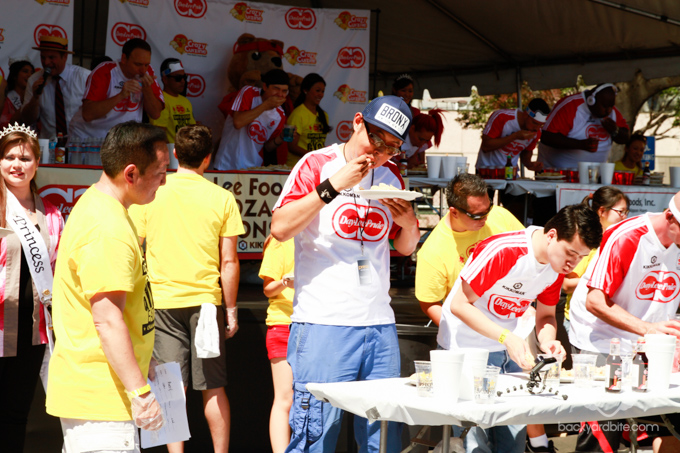 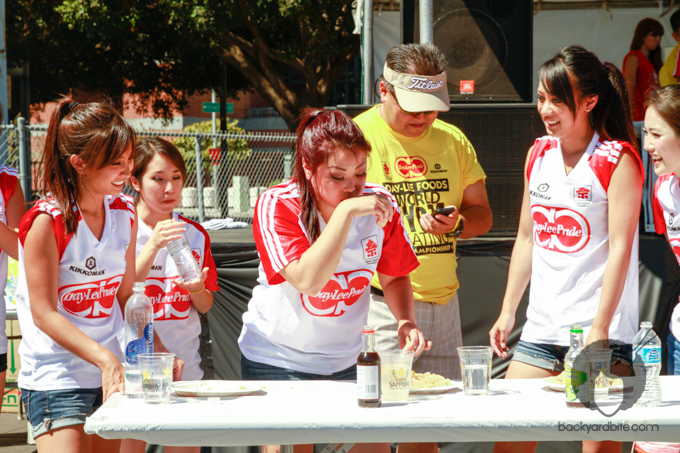 Chestnut ate about an entire plate of dumplings a minute… totaling a whopping 384 Gyoza! That’s a lot of dumplings, yo. 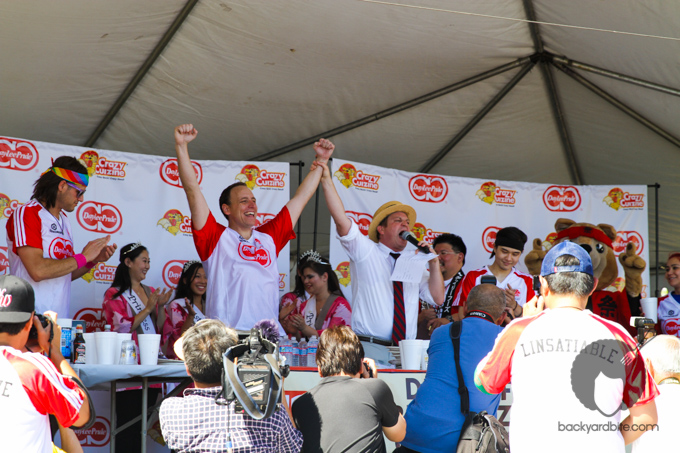 The winner!! Who ate more dumplings in 10 minutes than I’ve probably had in my lifetime.

After the competition, Eddie handed me a bunch of Gyoza (from his leftovers) and I think I probably tapped out at eating 9, just to put it into perspective.

I blame the heat and the fact that just prior to the competition, I mowed down two giant bowls of delicious ramen from the vendors representing at the nearby Ramen Yokocho Festival. 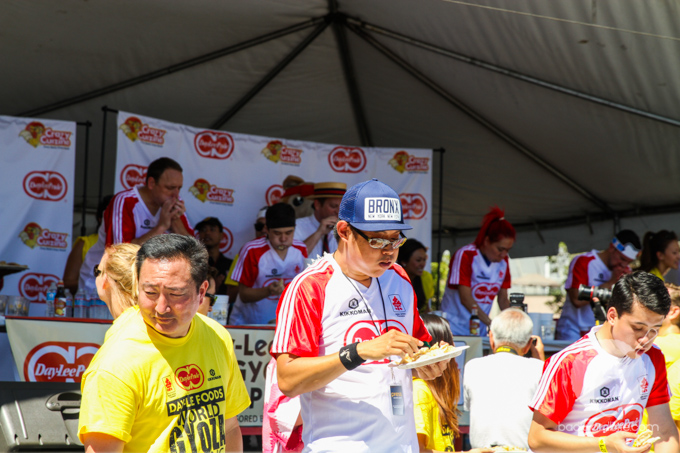 The judge is like, “Can I have whatever you don’t eat?” Eddie’s like, “If I hid some in my hat would anybody notice?” Chestnut’s in the back happily stuffing his face. 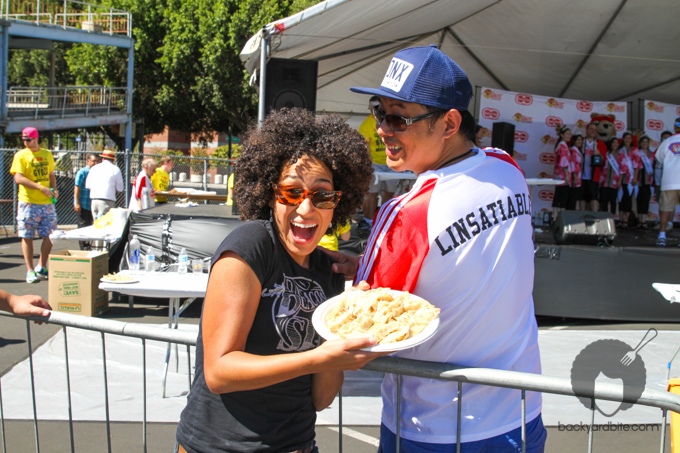 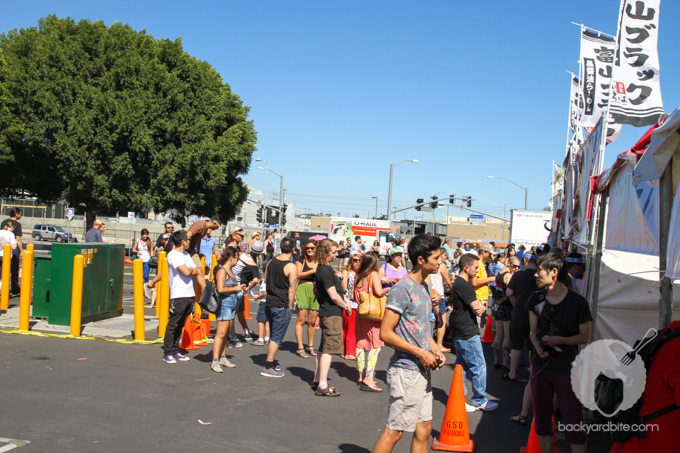 The ramen lines were mild because everyone was watching the competition 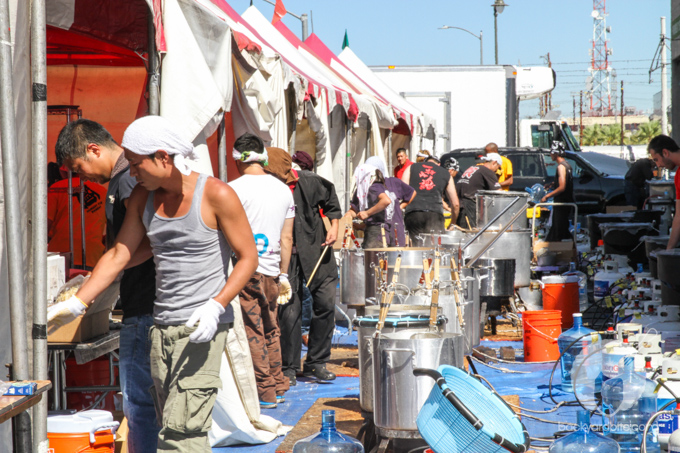 Behind the scenes… pots and pots of noodles

At the fest, I sampled from two different vendors. Both bowls were delicious and I was pleased to try a new ramen dish I had never had before. Shoki Ramen, a family run business from Sacramento presented a meat-free, soy milk based ramen broth with gluten free tomato noodles. Sounds crazy right? It was crazy. Crazy delicious. The soup had locally sourced spinach and mushrooms and tomatoes mixed in. So good and different. 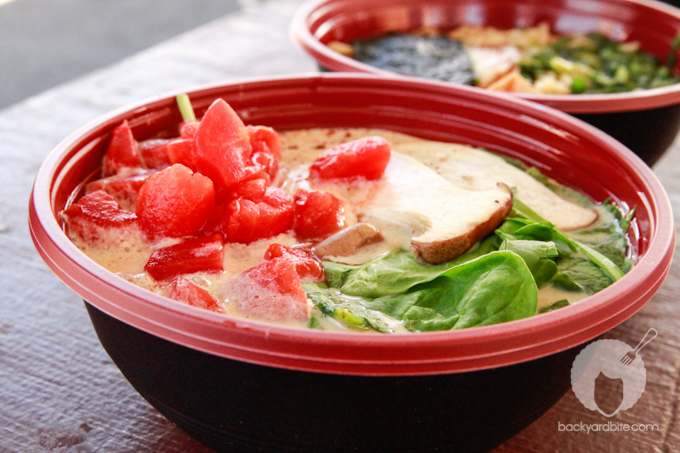 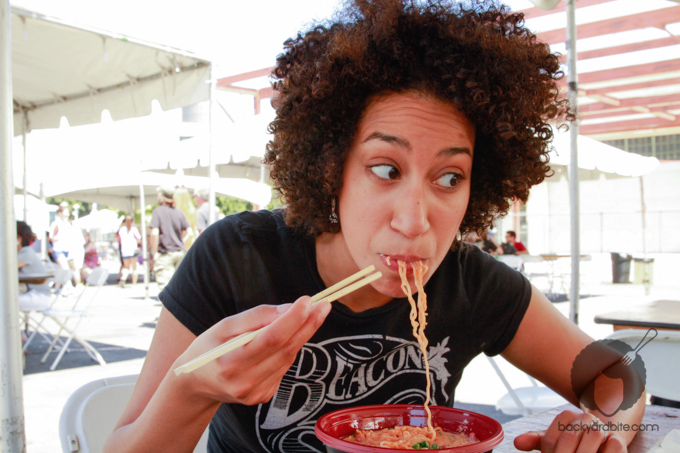 Backyard Bite knows how to slurp! 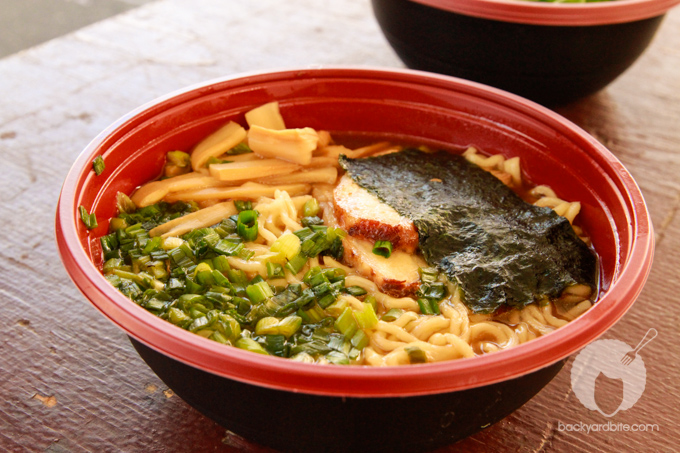 If you missed this weekend’s festival, they have one more coming up this October. Be sure to follow Ramen YokochoUS on Twitter and check their website for the next one.

Special thanks to Tomoko! 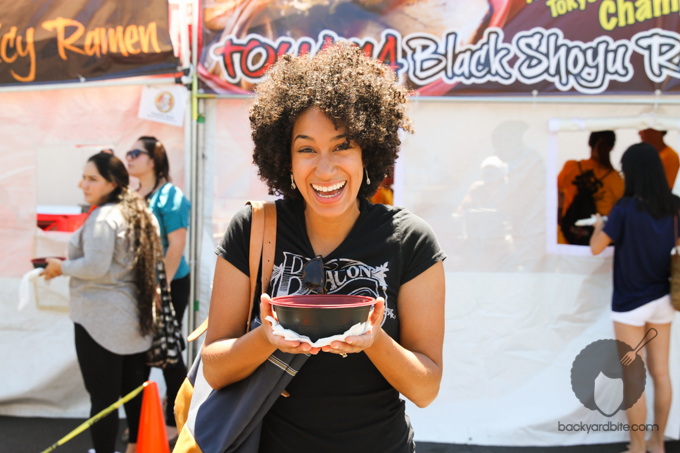 Happy as a clam. Or should I say… as a wet noodle.

More pics from the festival and competition: 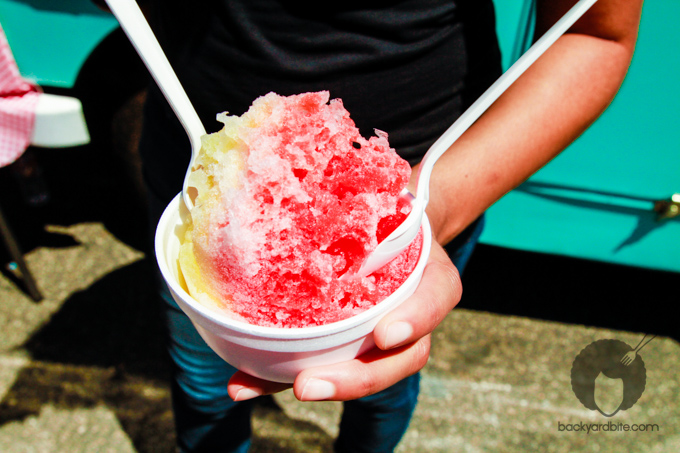 Refreshing Mango and Watermelon from the delicious Breezy Freeze Truck 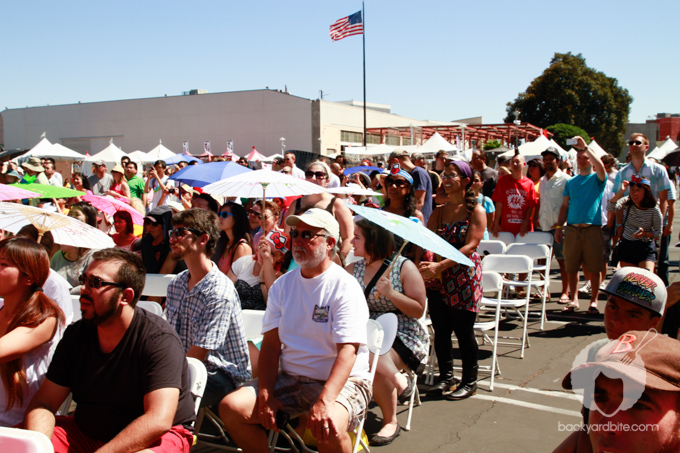 The crowd looks on as the competitors stuff their faces 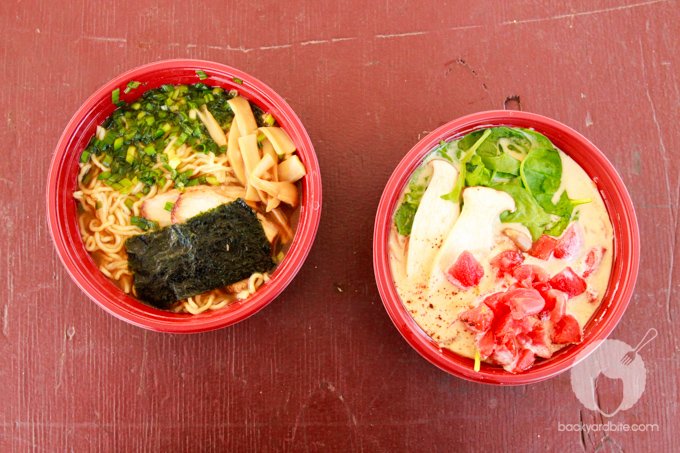 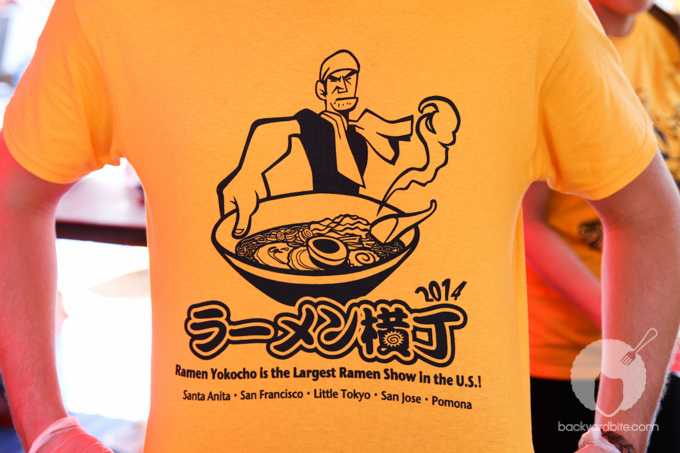 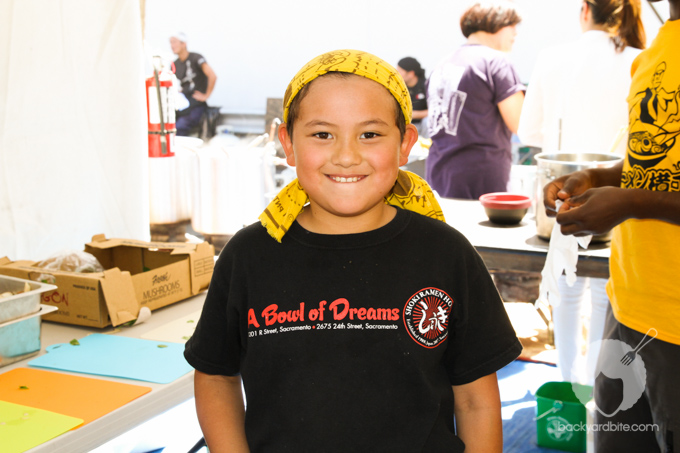 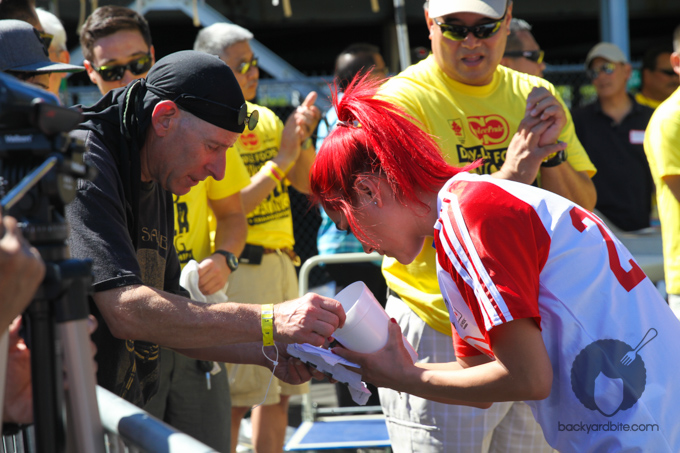 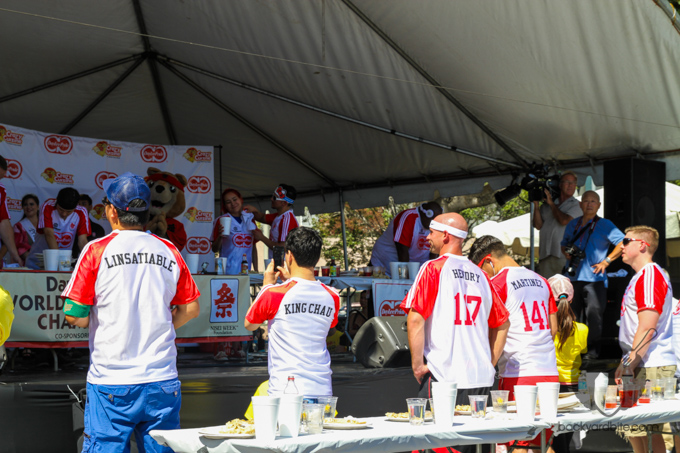 The competitors give much love to the veteran champ