So what do you do when you’re a successful Wall Street banker and you decide one day that you want to do something more meaningful with your life? You open up a California inspired, sausage themed gastropub…that’s what you do! Such was the case for Link co-founders Henry Costa and Thomas Benedict who wanted to bring some sausage sunshine to 3rd Street. 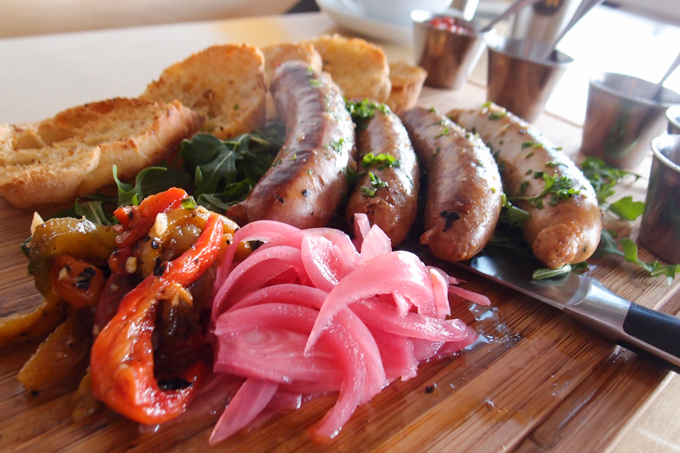 Instead of a dimly lit, crowded bar with cramped seating (like most sausage gastropubs these days), this restaurant is bright and airy. Communal tables, benches and bar stools make up the interior. There’s a bar, a patio –bonus points for having purse hooks, yeah! 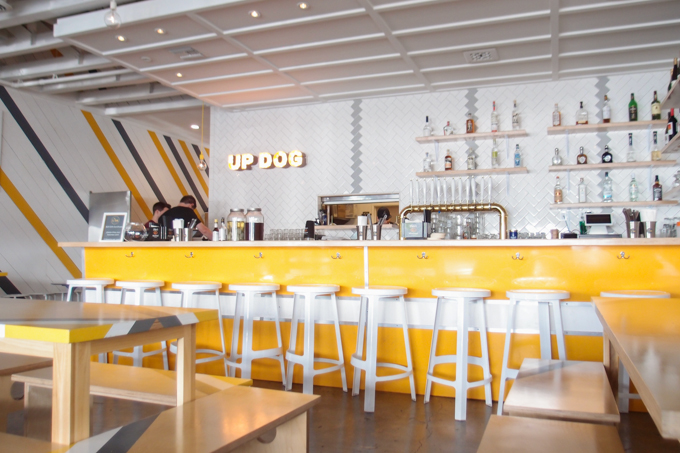 So what makes Link different? After 10 years of working for the “Man” (shakes fist in faux anger), Costa explained to me that he didn’t want banking to be his legacy. Instead, he and his friend Thomas decided to head to the West Coast to try something new. Costa had always had an interest in the culinary arts and having apprenticed many years back in a former Michelin starred kitchen, it seemed like a great new direction. With his devotion to the food and Thomas’ natural front-of-the-house ability, the partnership was an easy one. 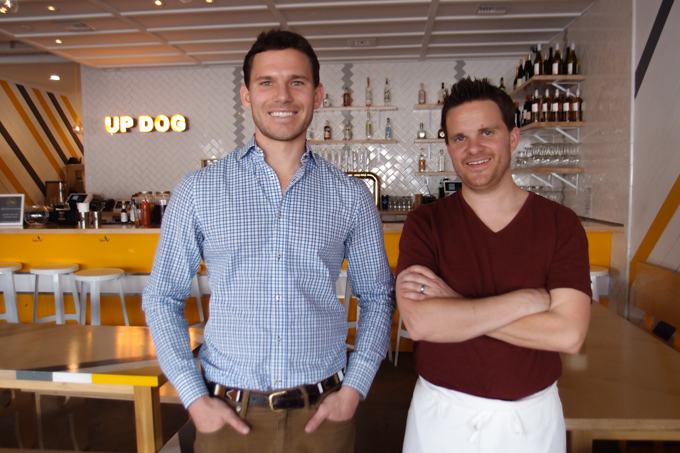 (from left to right) Co-founders Thomas Benedict and Henry Costa

While they seem to attract a mostly lunch-minded crowd (discounts offered for Beverly Center employees), Link is also a good casual dinner spot. Costa told me they want to be known for doing sausages differently. It’s not just about the bun – but how may different ways can you present the sausage? They serve it up in a taco, on a roll, in a chowder, melt, salad or a even flat bread “pizza”…

Here are some delicious menu items you won’t be able to resist: 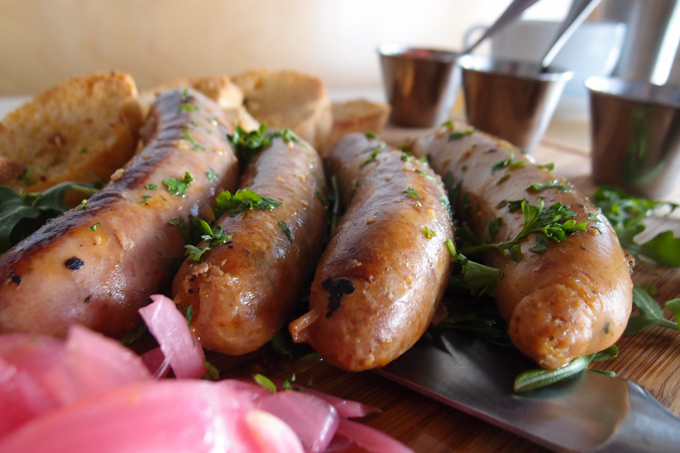 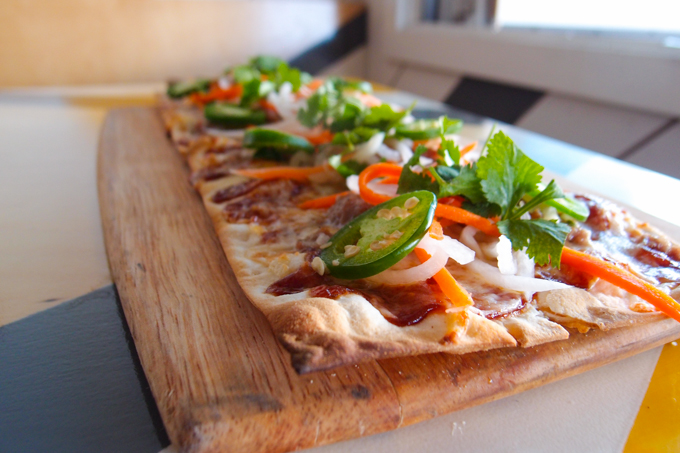 The sausages are clearly the star of the show.

Hormone free, nitrate free, antibiotic free and house made. Since I’ve been (impossibly!) trying to cut back on the carbs as of late, I was definitely interested in trying their Sausage Party (insert favorite dirty joke here).

Simply put, it is an array of sausages (you choose), dipping sausages, crostini and pickled red onions and peppers presented beautifully on a cutting board. I bounced back and forth from sausage to sauce trying to remember which I liked best (I think the chicken, no the pork..!?)… in the end, my dining partner and I pretty much cleared the entire board. I loved the addition of the pickled onions and peppers. So good. 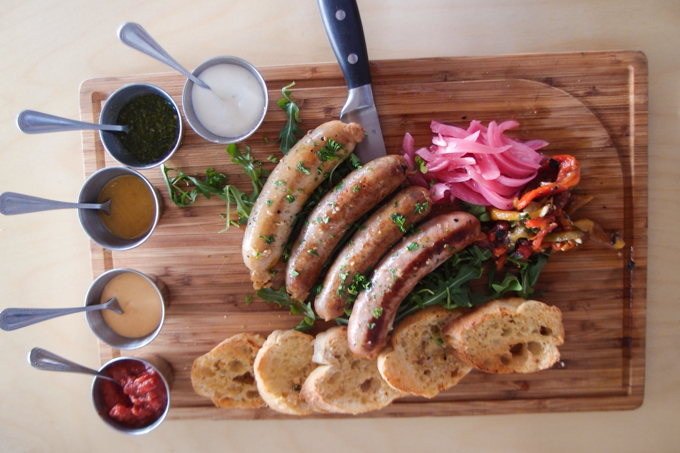 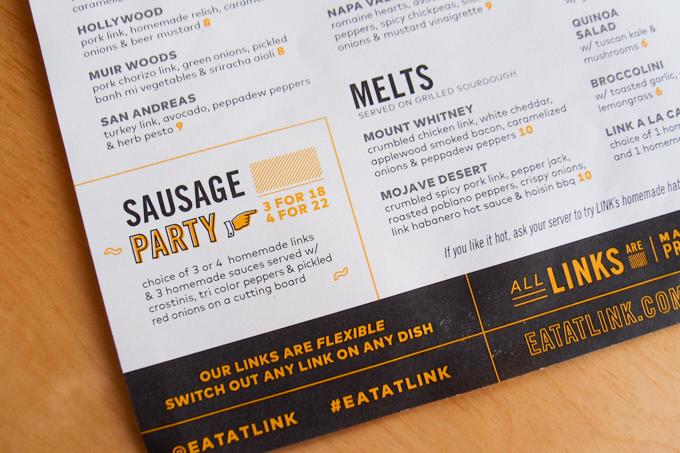 I was most surprised to find that they had a decent amount of vegetarian options. In addition to a vegan link (made with braised red cabbage, caramelized onion & curry aioli), you’ll also find, (the now menu obligatory) brussels sprouts, some broccolini and two hearty salads.

The Quinoa Salad (tuscan kale and mushrooms) was a nice compliment to the meatier dishes. Even though I knew in my head it was a “salad”, I found myself wanting it to be a warm dish.  Still good, nevertheless. 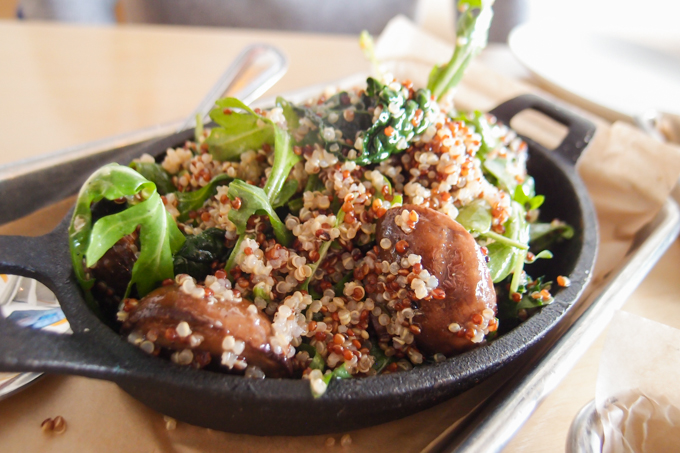 You can’t serve sausages with out a good fry to compliment. These are worthy. Also, the sauces are a force to be reckoned with. I chose the beer mustard and the curry aioli. Cant. Stop. Eating… 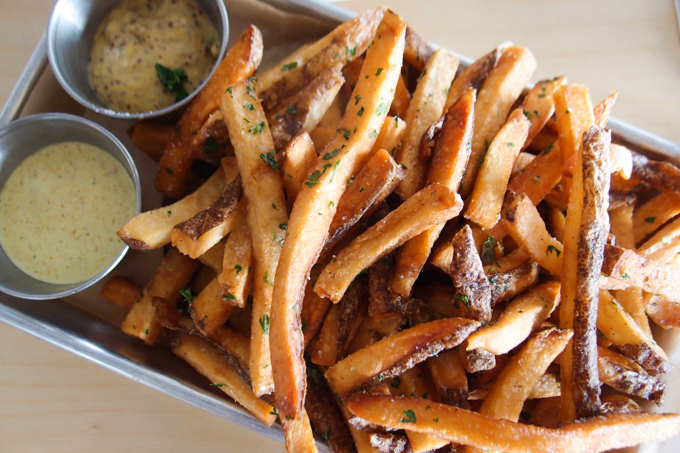 Every few weeks or so, Costa’s kitchen cooks up a special revolving item. The day I stopped in, I tried the New England style creamy bacon and sausage chowder.  It was a chunky and hearty melody of  both vegetables and meat — I hope it comes around on the menu again soon it was tasty. 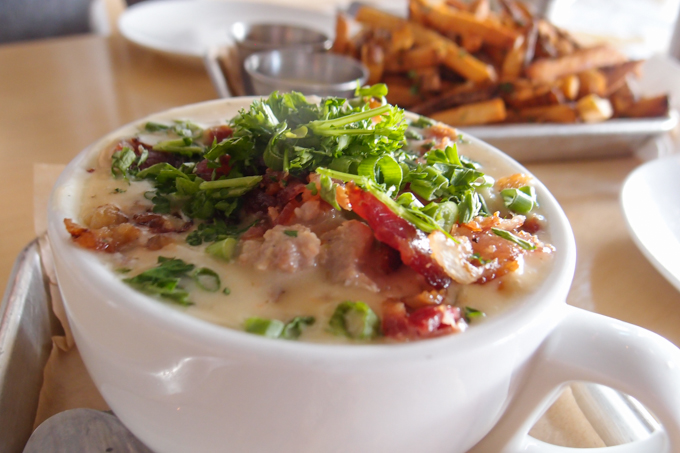 You can pick from a variety of California sourced beers, wines or spirits to go along with your grub. Drafts include; Golden Road, Saint Archer, Ballast Point, Lagunitas, Firestone, just to name a few. I tried their version of an Old Fashioned. It’s slightly sweeter than the traditional (they make their own syrup in house). It goes down so smooth, I forgot it had booze in it. Gulp. Oops. Who’s driving? 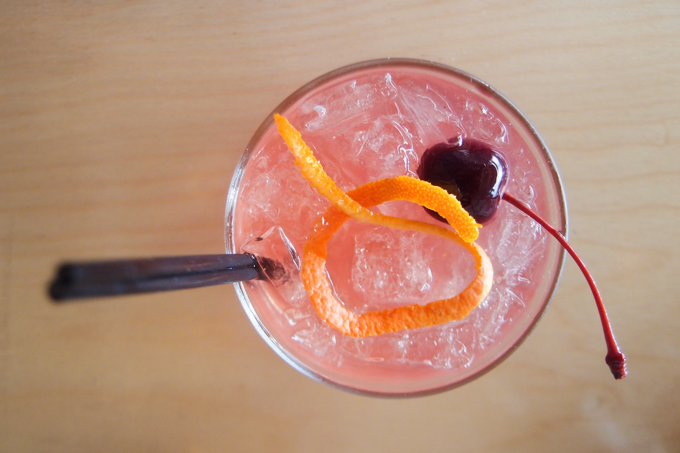 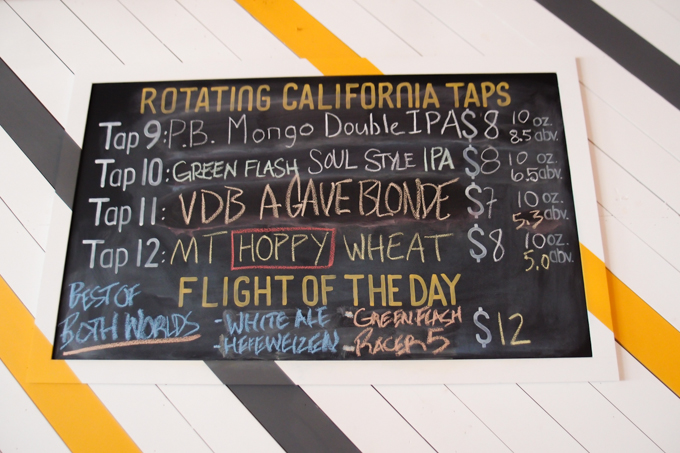 For dessert, there are options: an array of Coolhaus ice cream sandwiches and other house made desserts including a super indulgent caramel, toffee and whipped cream bread pudding good enough to share. 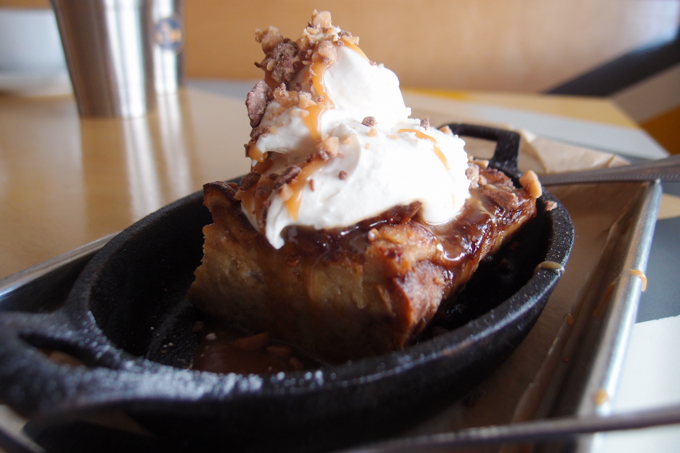 Don’t count these guys out for brunch! They offer a weekend brunch from 12PM-4PM (scrambles, breakfast burritos and sandwiches, biscuits and gravy etc.)

Park across the street inside the Beverly Connection ($1 per hour for the first 4 hours), they will validate for you… As it says on their website, “Please keep your parking ticket and show it to your server… they will take your parking charge directly off of your bill.”

More photos from inside the restaurant… 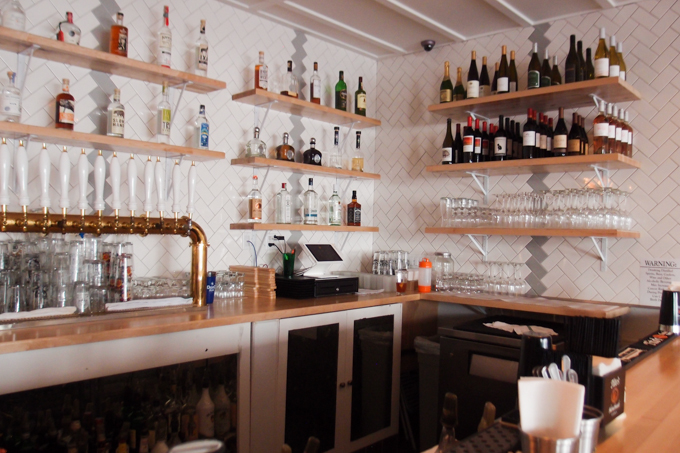 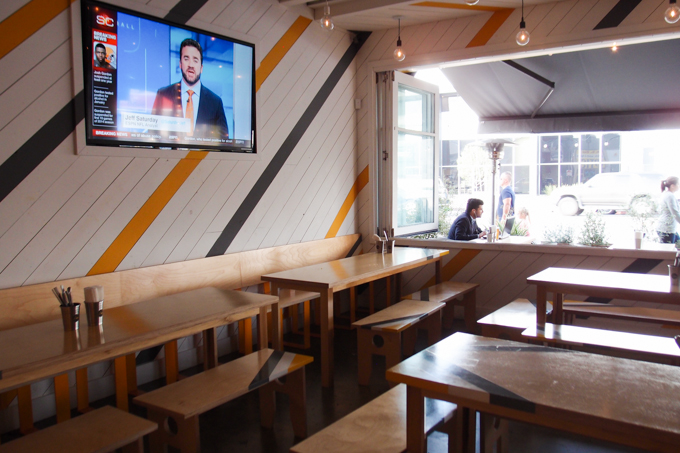 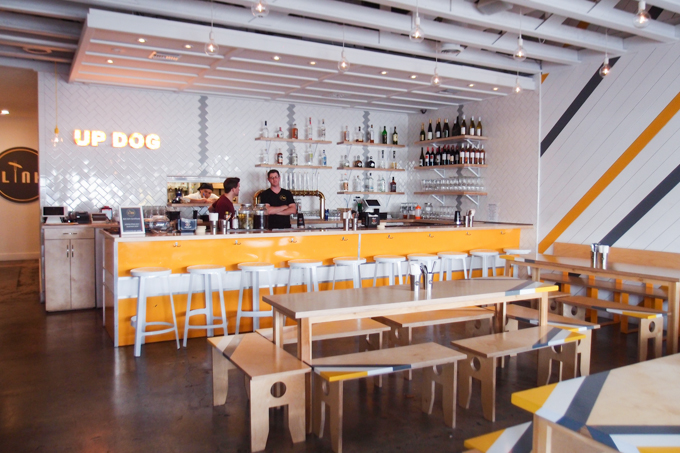 [This was a hosted meal. All opinions are my own]