It happens just once a year,  and over the course of 4 days, local foodies and visitors flock to the Pacific Northwest to taste and marvel at Portland’s highly desirable bounty.

That festival is Feast. And it starts today!! Yay! 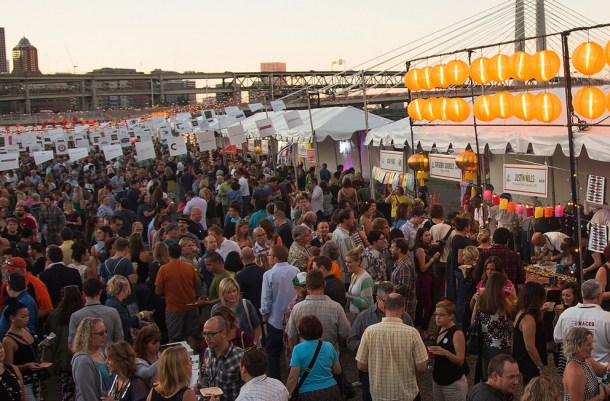 Last year, I had planned to go.

As a food lover, festival junkie and someone who had recently relocated to the Portland area, it seemed like the most perfect way to sink my teeth into the trendy food city I had only heard about. It was going to be perfect.

Only it wasn’t. As fate would have it, the same week I arrived in Oregon, I got crazy sick and subsequently, during the same week of Feast, I would have to travel far, far away to Mexico City and Oaxaca, Mexico for other work. Alas, attending Feast wasn’t in the cards for me that year.

What was in the cards, was randomly getting to meet one of the Feast co-founders, Carrie Welch about a month later, onboard an airplane (on my way to another food festival!). She was wearing a dope Feast tee. We chatted about food (of course!) and she told me just how great the Portland food scene really was. Coming from her, a former New Yorker, that was saying a lot.

The festival, like much of Portland, celebrates all things local. About 70% of the chefs and everyone involved is from the area. In addition, net proceeds for this fifth anniversary party will go toward Partners for a Hunger-Free Oregon, focusing on raising awareness to expand school breakfast participation in Oregon schools. Feast has raised over $230,000 to help end childhood hunger since its inception!

I don’t know how this Portland festival compares to the many others I’ve attended over the years, but I am looking forward to finding out this weekend. What I do know is that Portland has mastered coffee, beer, wine, all things vegan, and the local/sustainable niches as well, so I’m most excited to see how this festival represents all that Portland does best and then some.

Follow Backyard Bite on Twitter and Instagram to see what I eat and what I’m loving from the fest this week. I’ll recap some of my faves back here on this blog and show you what you’ll want to eat when visiting Portland.

In the meantime, to wet your whistle, watch this video of me and the super cool Aaron Franklin of Franklin BBQ in Austin, Texas. He will be returning to Portland’s Feast this year for his popular event, Franklin Barbecue and Family!