Here’s a crazy fact: Did you know that The Original French Dip, Philippe in downtown LA has been around since 1908? – That makes it older than the Hollywood sign! 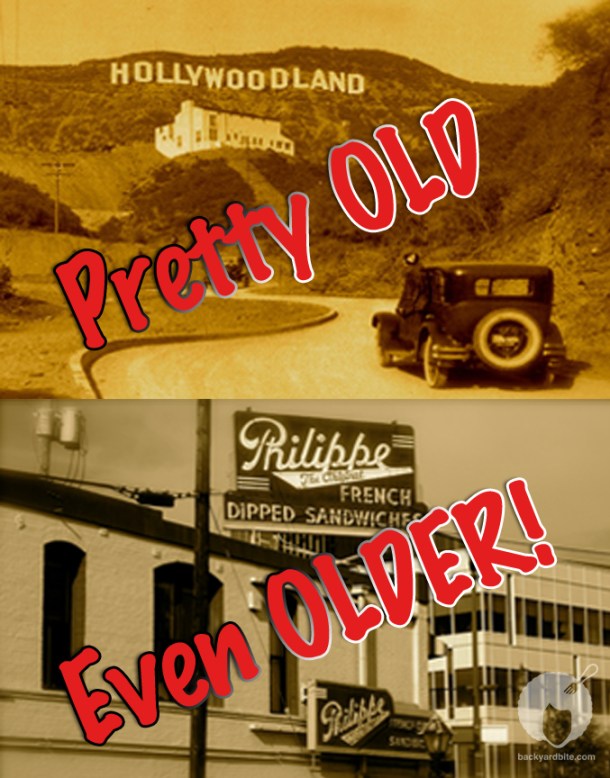 Before Philippe, I never had a fondness for The French Dip Sandwich. 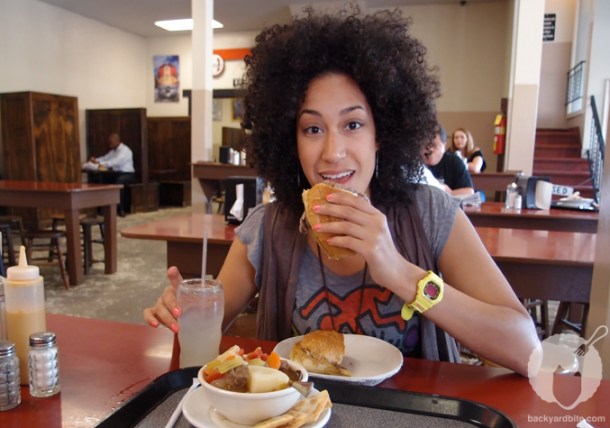 This little piggie (me) never cared much for roast beef and my neighborhood Arby’s was hardly a blip on my radar. I must have seen a feature on The Food Network about Philippe and after a few friends mentioned the name again I decided I had to see what all the fuss was about. Well, that was over 4 years ago and today, I consider myself a Philippe junkie. 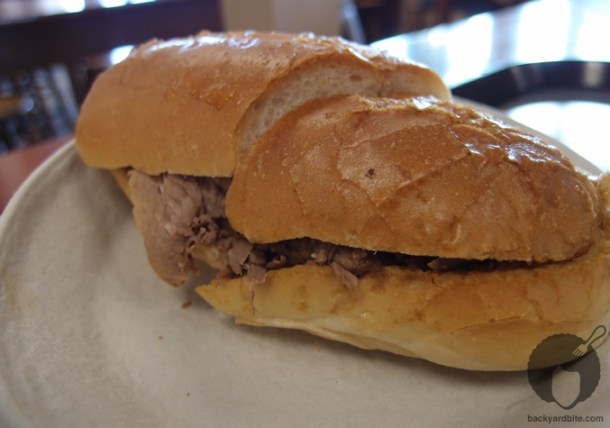 There are days when I crave it.  Their juicy and delicious sandwiches are so nom-worthy. At nights, I dream about them and their hearty beef stew (my fave!). Their chili also hits the spot on a colder day.  Not to mention their .75 cent lemonade. 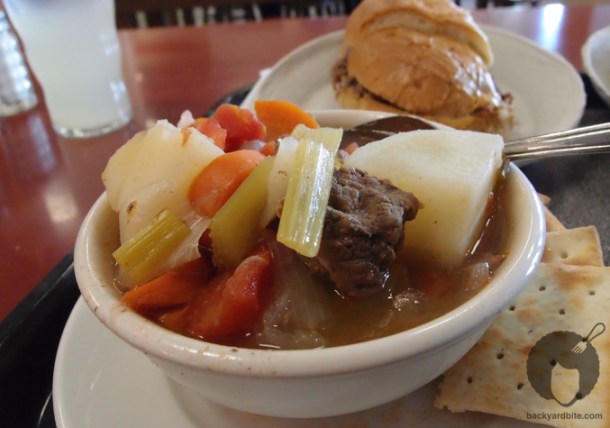 Being located in Downtown LA, just at the foot of Chinatown, this touristy little delicatessen is a 20-minute drive from my humble WEHO abode.

However, some days I will make the trek downtown just for a quickie. It’s so worth it. 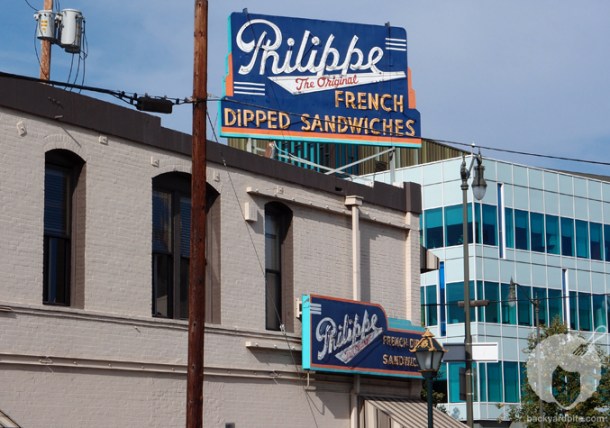 Be warned, this is definitely not an upscale, fancy pants restaurant. It’s not even a diner. Imagine instead you get in your time machine, set the dial to 1908 (when Philippe first opened) and enter a cafeteria-like basement. You stand in line and a nice hairnet-wearing woman in a pink dress (known as a “carver”) takes your order. She makes your sandwich and plates your food. It’s pretty cheap, but remember to bring some greens – it’s CASH ONLY. (After all, they didn’t have credit card machines in the 1900’s – duh!) You then pop a squat at one of their many community tables or booths. Though this place is huge, it fills up fast, especially for lunch or after a Dodger game.

Both Cole’s Pacific Electric Buffet (on 6th street) and Philippe each consider themselves the originators of the French Dip. They both claim to be the first, but don’t bother trying to find out the truth. It’s like asking “how many licks does it take to get to the center of a tootsie pop?” The world will never know.

One version about the famous sandwiches’ origins is that in 1918, the original owner, Philippe Mathieu accidentally dropped a sandwich in a roasting pan filled with juice still hot from the oven. The customer agreed to eat it anyway and voilà, the French Dip was born. It’s all about the au jus, baby. It’s an ingenious idea, yet so simple. It makes the french loaf so tasty and moist. 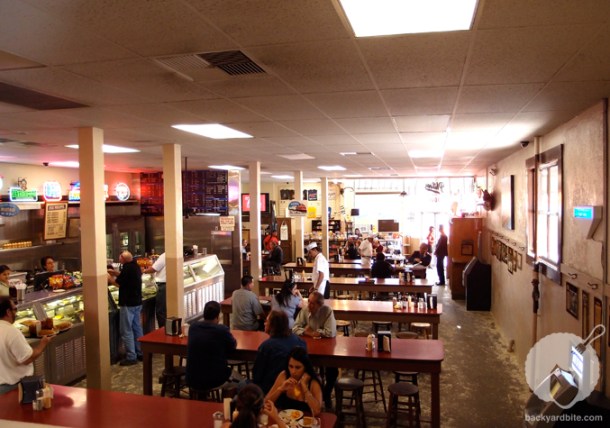 This place is so cute you just want to pinch its cheeks. If your grandpa was a restaurant, his name would be Philippe and he would look like this. Still filled with wood chippings on the floor, old photographs and vintage decor, Philippe is one of the oldest continuously running restaurants in Los Angeles. Seriously, any place that has survived the Great Depression, two World Wars (and our current recession!) definitely gets bragging rights. 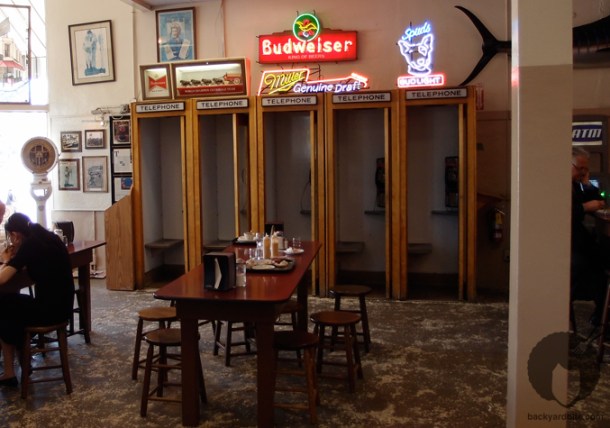 Try their roast beef, roast pork, leg of lamb, turkey or ham dipped in their specialty au jus and throw on your choice of cheese for a few cents more. Like any good delicatessen, they have coleslaw, homemade potato and macaroni salads, hard-boiled eggs pickled in beet juice and various spices and pies. They even make their own hot mustard in house. Use sparingly – it’s spiiiiiicy. 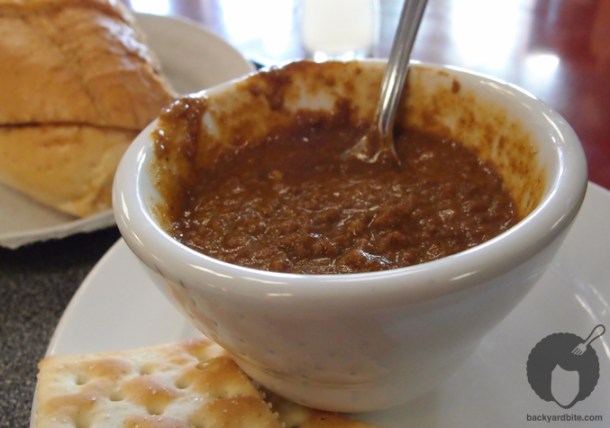 Philippe is a no frills delicatessen that is a Must-Bite when visiting downtown LA.

BYB Tip: Can’t beat a place that provides their own self-park parking lot. They have two. Oh, and they serve beer also! Need I say more? 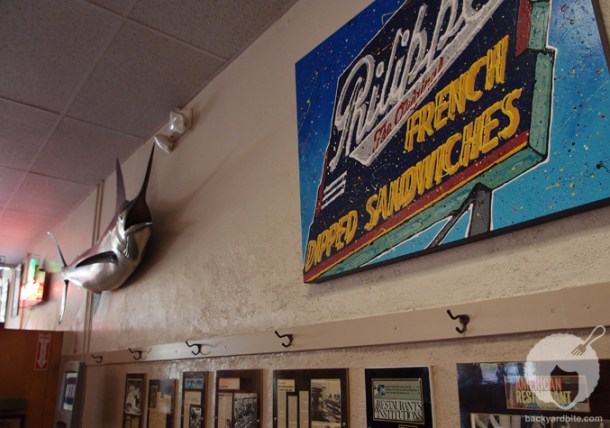