Remember Morgan Spurlock? That mustached documentarian who ate a bunch of McDonalds for a month and got sick and fat and showed us why we should all to stop ordering supersized fries at the drive-thru? Yeah, that guy. 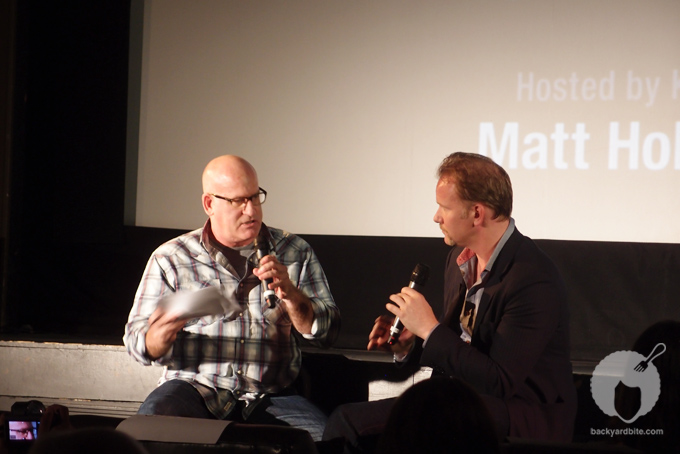 Super Size Me came out around the time I was in film school, and I remember it being very inspiring for me. I went to  Columbia College Chicago and studied doc filmmaking among many other concentrations. In the course of my studies, I had to watch a lot of different films. Super Size Me was one that particularly stood out because it was one of the first mainstream documentaries that I watched that focused on food. It really hit home for me because like a lot of kids, I used to eat a LOT of McDonalds. (It’s a wonder how I didn’t end up with weight or health problems!) 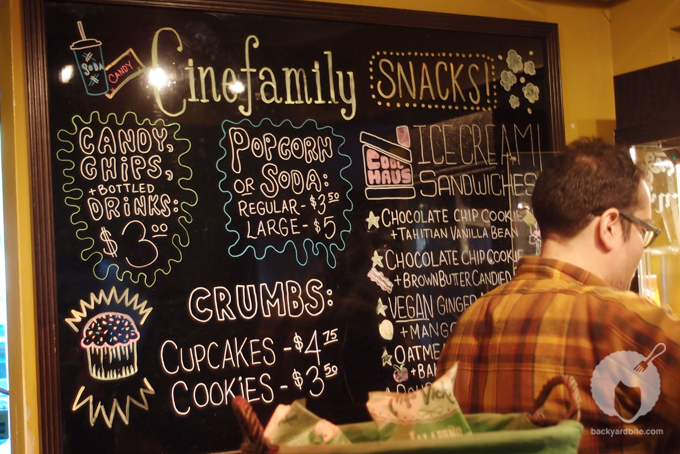 Regardless, whether you liked it or not, the movie inspired change. A McRevolution, have you. The doc inspired people to think before they put stuff in their mouth and it also got McDonalds to take the Supersize option off the menu. So, that’s pretty cool… 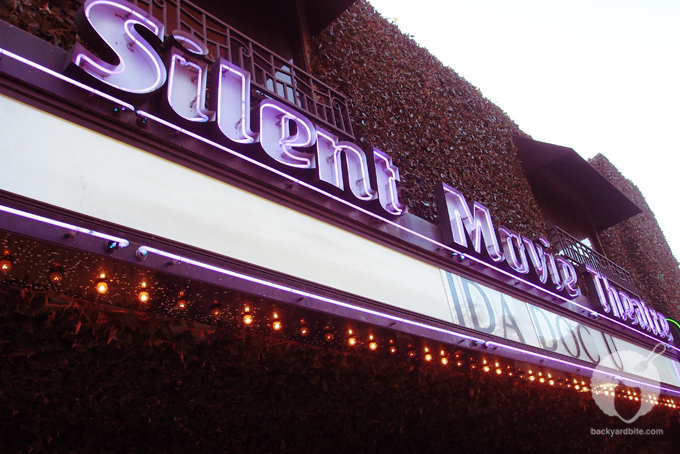 So, anyway. I had one more stop on my Eventbrite blogger tour and I chose to check out a Q & A at Cinefamily. I used to live down the street from this silent movie theater and never once stopped by there. I thought it was time I check out the space and listen in for a little inspiration from the prolific filmmaker… 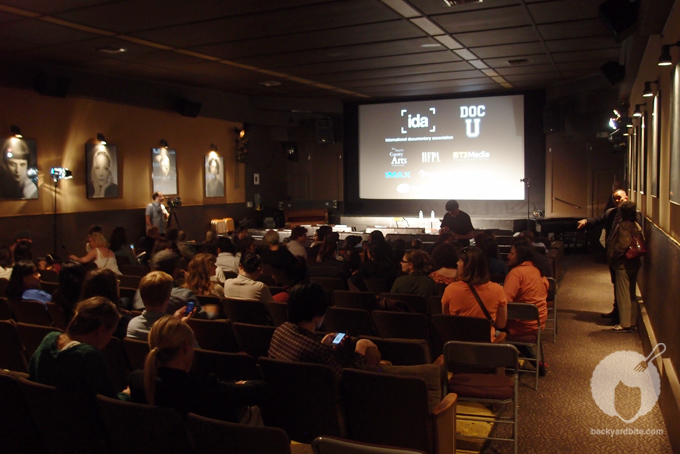 Spurlock has been quietly building his storytelling empire, on the web (Hulu’s a Day in the Life), on the big screen (Mansome, This is Us) and now once again on TV with his CNN show, the Inside Man. He’s a busy guy, producing, directing, writing, hosting – a product of two “serial entrepreneur” parents.

His new show, The Inside Man takes him into the work of dirty jobs and gives audiences perspectives from the underbelly of American professions. Being that a few of his first couple of episodes were focused on farms and migrant workers, I wanted to see what he had to say about the business of food, once again.

On the show, he deals with topics like marijuana, guns, immigration, education, elder care, unions, and worked alongside immigrant workers in Florida picking oranges... 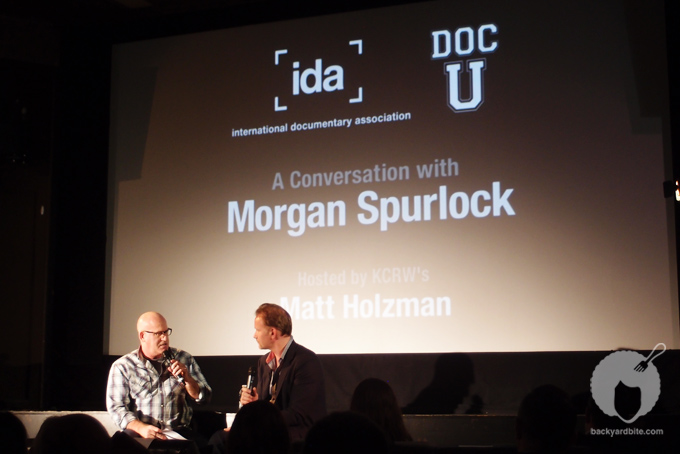 As a filmmaker and storyteller myself, I got a lot out of this talk.

Here were 5 quotes from the Q&A that particularly stood out for me:

On being in his films: Spurlock says, “Once you put yourself in the film, they (the viewers) are not just judging the film, they are judging you… (then it becomes) not just about the narrative of the movie, but about you as a human being… The quality of the story ultimately is what I hope is the most important thing, and isn’t overshadowed by what I’m trying to do (on screen) in getting you to watch.”

On getting the story: “We go in with a plan, talk about the beats that we want to hit… but with all the stuff that we shoot, we never shoot things twice… I want them (the characters) to be real in the moment that they are in… We shoot for the day, and there are times when we shoot a conversation and maybe it didn’t end the way we want and you know, we just didn’t get it, it didn’t happen, and we move on and have to trust that we’ll figure out a way to tell story and put it together later.”

On characters: “Great characters trump everything, because out of them will come great story.”

On his new show Inside Man: “It’s not reality television, it’s a show that deals with reality, in television… (when filming a documentary) Either you get it in the can or you don’t – when you try to manipulate it you start creating Honey Boo Boo type shows… and that’s not documentary, that’s reality television.” 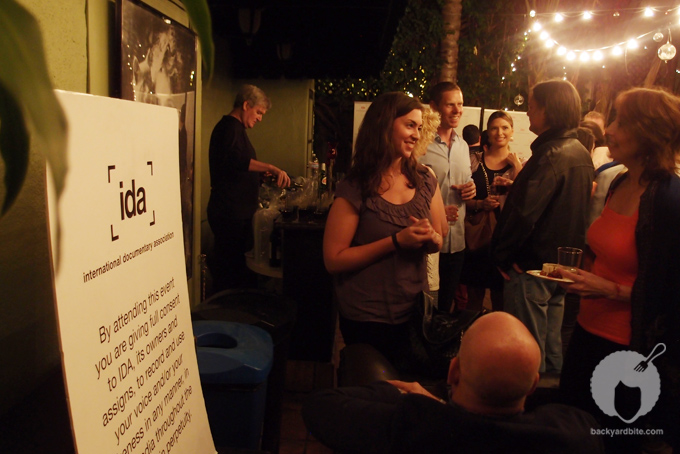 After the Q and A, viewers were invited to hang out in the back patio for horderves and drinks with the filmmaker. Such a cool event happening right in my neighborhood. Check out IDA for their awesome doc talk series and Thanks eventbrite for facilitating! 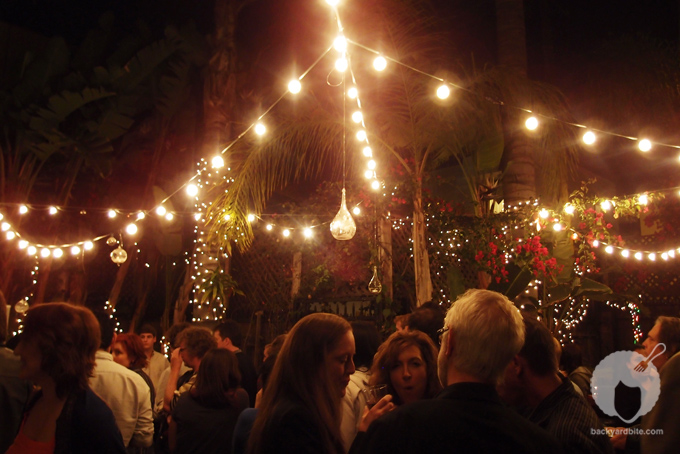 [This post is part of an ongoing partnership with Eventbrite LA. Eventbrite enables people all over the world to plan, promote, and sell out any event. It’s also a destination for people to discover awesome events going on in THEIR city! Whatever your desires, hobbies, or interests – from photography workshops and wine classes to food festivals and industry conferences, there’s an event on Eventbrite waiting for you to attend! Keep up on the goings-on in LA by following Eventbrite LA on Twitter, liking them on Facebook, or signing up for their monthly newsletter! Planning an event? Go ahead and create an account to get started.]