What does it take to be an entrepreneur? To build something from the ground up?

This is one ice cream maker’s story of how she does it… again and again… and very deliciously.

Rocking a blue streak in her hair, purposefully miss-matched earrings and a self-made T-shirt that says “THERE IS NO BOX.,” you wouldn’t think that at first glance this down to earth, Mid-Western gal is actually a creative mastermind. She is also an artist, filmmaker, artisan cake maker, producer and yes, entrepreneur.

Diane R. Jacobs is the owner and brainchild of Divine Dips, a delicious vegan ice crème that up until two years ago, had only been enjoyed among her family and friends. She would send it in freeze-dried care packages and ship it to family members across the country. It wasn’t until the end of 2009, that she received a desperate phone call from her younger dairy sensitive sister Denise insisting, “You have to market this! You have to share this with the world!” 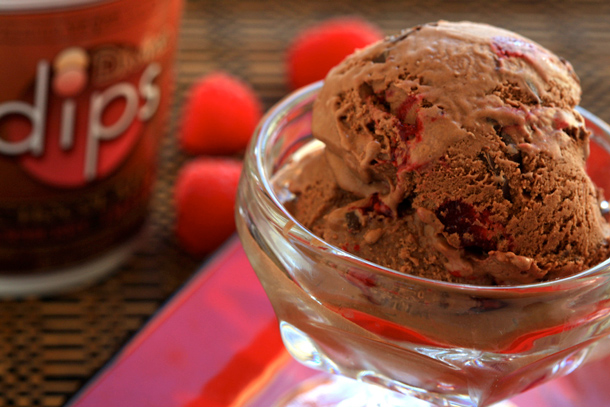 But we are getting ahead of ourselves. Let me rewind just a bit.

Diane is a self-taught baker who always saw the beauty in food. She had a passion for it early on, baking with her mom at the age of 5. By age of 14 she was already making and selling custom cakes with a home cake decorating kit. She attended The School of the Art Institute of Chicago (SAIC) to hone her artistic self, and then later transferred to the University of Cincinnati to refine her design skills. She was studying architecture. All the while, she was always baking cakes.

It’s funny how the things we do (on the side), the things with the least amount of planning or thought, with the right timing and opportunity, end up becoming the things that we were destined to do…. 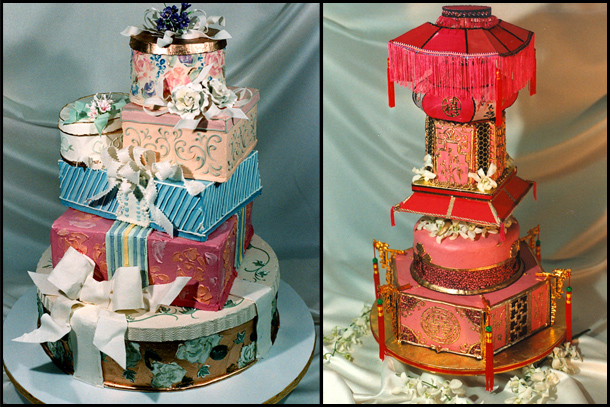 It was only natural that Diane ended up at a bakery called, Cake and Art in California. Diane learned the ins and outs of not only making beautiful, delicious and artistically designed cakes, but also how to run a retail business. She left after 9 short months and at age 26 with the help of investors (her family and friends) she opened up her very own shop called Cake Works in Hancock Park, CA. Cake Works quickly grew and became a popular go-to for parties, celebrities and sitcom anniversary show like Rosanne and Boy Meets World. Diane was making TV appearances and perfecting artisan cakes (about 7 years) before the Food Network even dreamed up shows like Ace of Cakes.

Her business partner suddenly passed away and after 12 successful years, it was time for her to try something else. When I asked Diane why she didn’t sell the business and keep it alive, she simply answered, “making those cakes was my art. Who else could do my art?” 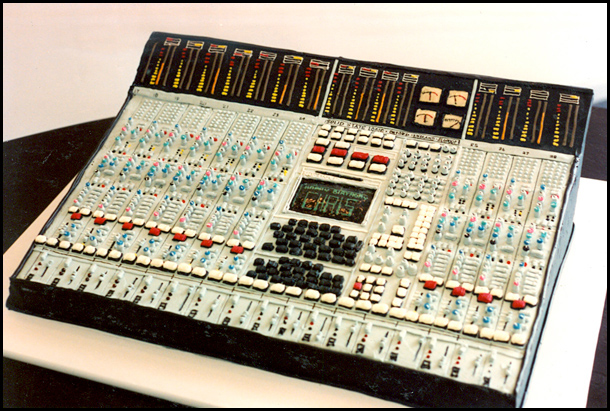 Unexpectedly, her experience making cakes ended up directly influencing her ice crème. She’s very careful about not calling it ice “cream” as it contains no milk. Being sensitive to dairy herself, Diane learned early on about the importance of being “thoughtful” with one’s food. She started to experiment with various raw and vegan diets and really began to appreciate the simplicity of the dishes, and later apply it in her ice crème recipes and in discovering unique flavors.

Chocolate truffle, amaretto and almond, coffee… Diane wanted to make sure the flavors were not only unique, but could appeal to various tastes. My favorites include the Amaretto Almond Trio and the Chocolate Raspberry Truffle (pictured below). 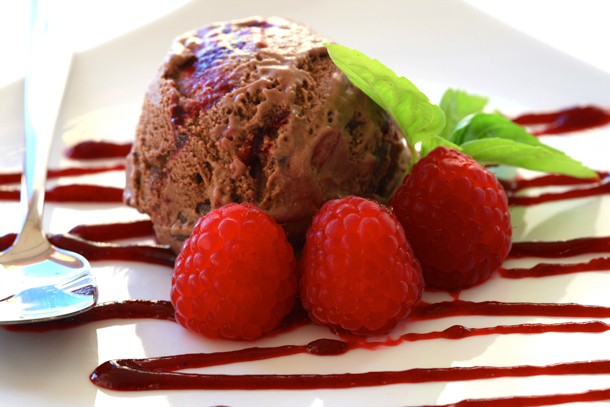 The problem with many non-dairy ice creams out there is that they are customarily really “thin and watery, often lacking in flavor and distinction” says Diane. In her early trials, she noticed other ice creams just didn’t have the right texture about them. Diane really wanted to get down to the science of making the perfect “balance” with the right ingredients. To her it was about figuring out the best way to make a smooth, rich, melt-in-your mouth texture.

She experimented with fat percentages, proteins and finding the right liquid component, to create “body” and make it act and taste like the real thing. Diane says “It’s all a balancing act. You try not to add too much of any one flavor so they all compliment each other.” In the end, her “holy-trinity” of ingredients became a careful partnership of cashew, almond and coconut milk. That being said, I guess you could say that her ice crème is also… good for you! 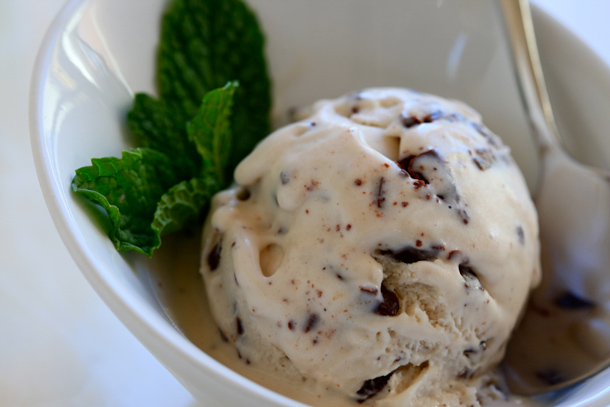 Being a twice successful business owner, I asked Diane if she had any advice for young entrepreneurs who may be afraid of taking the first step into a new business. This is what she said…

1. Have a good business partner. (In Diane’s case, it’s her biochemist, mom!)

2. Be an open vessel for good ideas. If you have an idea, just “DO IT.” Diane explains, “I know it sounds so cliché, but really, just do it. Commit yourself to doing it and everything will fall into place… If you’re thinking ‘I want to do it…BUT…,’ then you have just stopped yourself… you can only do it by setting the goal to do it. It will come to you, if you seek it but you have to seek it first… The great thing about being an entrepreneur is that we can build our own business model and the only way you can get there, is to make the determination that you WANT to be there.”

3. Surround yourself with positive people. So many people are discouraged by an unsupportive group of peers or even family members, she explains. “We really live in a society that thrives on negativity and how hard something is going to be… doom and gloom…. You have to really seek to rise above it and surround yourself with positive beings… sometimes that means cutting off the people who know you the best, because they continue to fill you with doubt. As long as you are swimming in doubt you’re not going to get anything done.”

4. Never settle. “If something doesn’t work, I need to know why. At the start, I had reservations about manufacturing ice crème because I didn’t have a clue where to begin.” Diane had retail experience, cake-making experience, but virtually no experience in creating a marketed product. How does one get a manufactured product out there in the world? Well, Diane did a LOT of research and experimenting. There were, of course, set backs, money invested and lost at the start, but that’s all part of the game. She didn’t give up. “You learn, by doing,” she explained.

5. “Do something you love that’s worthwhile, while you are here.” ‘Nuff said! 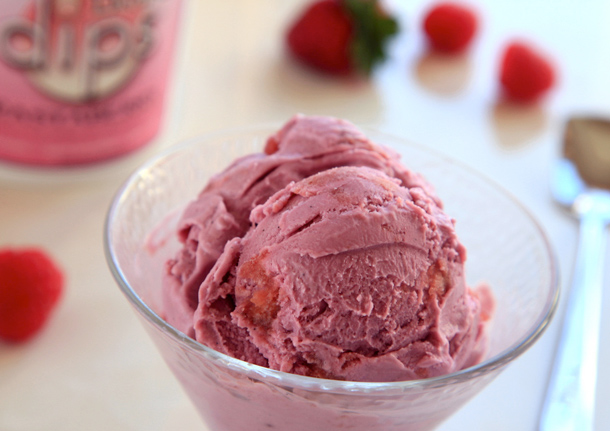 There are plans for a possible brick and mortar shop for Divine Dips in the future. She’s also considering jumping on the food truck bandwagon. “It would basically be a retail shop on wheels!” She says. Though right now, her main goal is continuing to create new delicious flavors, get her product in more retail stores and getting the word out that there IS such a thing as delicious, non-dairy ice crème.

The main focus for Diane is spreading the word and really educating her customers. “This (product) is a special thing… And if you are really missing ice cream, and you really want to taste ice cream but you can’t eat it, Divine Dips is there.”

Demand Divine Dips in your town! You’ll get hooked, promise.