I recently sent a foodie pal to investigate Donut Farm, now officially open in Silver Lake, CA. My friend did not think twice about a chance to try some tasty new treats near her neck of the woods. Located in a no-frills strip mall near Sunset Junction, Donut Farm is bringing to LA it’s version of gourmet, vegan organic donuts.

These guys don’t use a commercial mix, instead they have a proprietary flour blend which is mixed with 100% organic ingredients. The donuts are then hand-dipped in artisanal, original glazes which are made on-site. 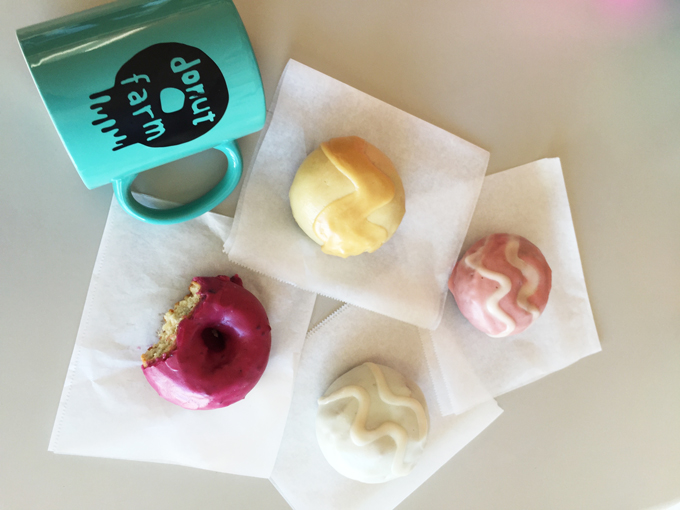 Look, people. It’s hard to make a vegan donut! After all, you have to take out all the delicious stuff that makes the donut taste good! It’s also hard when you want to eat healthier, but there are few options that won’t upset your belly or go against your moral fiber. Enter Donut Farm, a chance to cheat… and not feel so guilty. My friend bit the bullet for me (since I’m in PDX for the moment), and paid them a visit.

Her report: She said she thought the donuts were “light and fluffy.” Her favorite was the fresh blueberry because it had bits of fresh blueberries in the frosting. Other seasonally changing flavors are Whiskey Tangerine Fig, Matcha Green Tea, Salted Caramel, and Mexican Hot Chocolate. They also have a vegan coffee bar which serves cold brew and lemonade along with fresh hisbiscus tea which she found to be “tart and tasty.”

Originating in the Bay Area as Pepples Donuts (aka Pepples Donut Farm), Donut Farm should be well received amongst the health conscious in Silver Lake.

If you try them, let me know what you think!